Worms 2: Armageddon is the latest instalment in the popular Worms franchise from Team 17, released on XBLA in 2009 and finally hitting PSN in 2010. Not to be confused with Worms 2 (1998) or Worms Armageddon (1999), Worms 2: Armageddon is a direct sequel to the XBLA (2007) / PSN (2009) reboot Worms, featuring many of the franchise’s best qualities, as well as showcasing a few improvements of its own.

Even after all these years, there is still something delightfully fun about creating your own team of worms. It isn’t that the customisation is extensive (it isn’t) or that it even makes a difference to gameplay (it doesn’t). There is just an undeniable charm to naming these little fellas, putting silly hats upon their heads, giving them even sillier accents, and then letting them rip against another team of similarly silly, floppy fighters. The fun factor of the franchise hasn’t diminished in the slightest over the years.

Forgetting Worms 3D (1999) entirely, Worms 2: Armageddon returns to where the series was always at its strongest visually. 2D landscapes are surrounded by deadly masses of water, with the various weapons at your disposal constantly chipping away at the safety of land. With dynamic backgrounds and a HD resolution of 1080p, this is the crispest, brightest, most stunningly beautiful version of Worms ever seen. The sound quality is also fantastic.

The single player campaign consists of 30 missions of increasing difficulty, with 5 extra missions unlockable through the game shop, which also features purchasable goodies such as new hats and gravestones for your worm troops. The gameplay is turn-based as always, with four worms to a team. 6 new weapons are introduced, including the bunker buster, lightning strike, electro magnet, emergency teleporter, poison strike and the super bunker buster.

Although the single player campaign has the usual predictable team battles, it is when things get more puzzle-centric that it truly shines. Some levels feature an actual objective rather than the usual battle. Using only a magnet and a punch to eliminate an enemy worm across the level can be a real head scratcher, injecting the usual proceedings with some much needed variety, as well as extra challenge.

It is recommended that new players tackle at least some of the single player levels before venturing online. There is no weapons tutorial per se (the tutorial levels themselves are rather vague) and it is easy to loose a turn by botching up the use of a new weapon that you are unfamiliar with. On the other hand, such mistakes can be hilarious when played with a friend who is willing you to mess up against the clock. The unpredictability of the Worms games has always been a highlight, especially during group games.

Online (1-4 players), things work exactly as they should. PC gamers may lament the exclusion of a proper game lobby, but to be fair the matchmaker does a great job and players can easily set up their own custom games if they desire greater control. The PSN version also features a few exclusive items such as a Sackboy helmet, which looks great online against Helgast helmet clad foes. 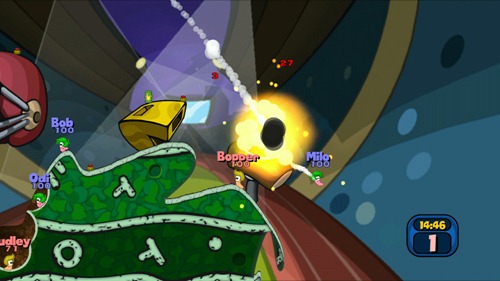 Overall, not much has changed with Worms 2: Armageddon. The computer-controlled AI worms will still annoy you when they lob a grenade with deadly precision across an entire level. The learning curve can also be pretty steep for those new to the franchise. You still can’t play your own music in the background either, which would have been a brilliant inclusion. In short, it won’t convert any haters.

However, inspired new single player missions. glorious HD visuals and sound, and that old Worms charm all do this game proud, especially for fans. It isn’t revolutionary by any means, but it does possess a nostalgic charm that merges perfectly with the various tinkerings and updates that have been implemented throughout. A wonderful downloadable title that is as much of a blast alone as it is with a friend at home or online.