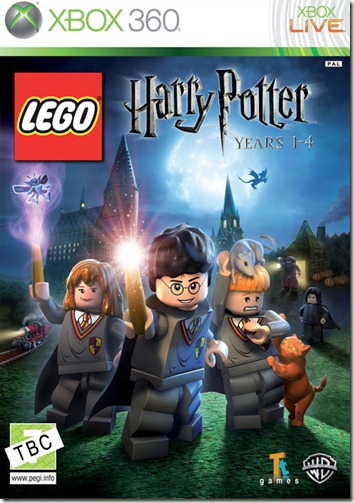 Sixty years old, LEGO is a brand name that almost everyone in the world should be familiar with by now. The construction toy of choice for any and all children, over the past few years the company has also loaned it’s product to other markets, such as animated films and video games. Even if you’ve never played a LEGO game before, it’s been impossible not to notice the steady stream of titles from the franchise. Star Wars, Indiana Jones, Batman and now even Rock Band have all had the plastic make-over. Their success is hard to ignore. So, when the attendant at my local retailer (EB) recommended LEGO Harry Potter: Years 1-4, I figured I’d finally see what all the fuss was about.

It’s not hard to see why developer Traveller’s Tales selected the first four Harry Potter books as their inspiration here – this is very much a children’s game and while the books were initially targeted at kids, they got more dark and dramatic as they went on. Here, character deaths (while few and far between) are animated as a LEGO figure falling to bits and landing in a plastic pile. The tone remains light: the one time this happens during a cutscene, the father of the deceased is cheered up when he is handed a sheet of paper showing the basic instructions on how to put a LEGO toy back together again.

LEGO Harry Potter features over a hundred characters – while hardcore readers of the books may enjoy this, there’s a definite limit to what you’ll get from the experience. With the exception of bigger characters like Hagrid, the entire cast is made up of the same scaled figurines from the toy line itself. Harry with his scar and glasses is easy to find in a crowd, but Ron is almost impossible to pick out from the rest of his family, who all have the same bright orange plastic hair piece. The background cast of Hogwarts students may look impressive, but look closely and you’ll see the same three character models many times – the only difference between a Hufflepuff girl and a Ravenclaw girl is whether or not she’s wearing a yellow or blue coloured uniform.

The game has virtually no dialogue – the cast has entire conversations by using grunts, affirmative noises, gestures and expressions. It’s surprising just how much depth can be shown with a simple printed face on plastic – basic age lines and wrinkles separate adults from the younger characters. Some scenes are a little vague and if you don’t know exactly what you’re looking at, it’s a bit easy to become lost. Chances are good though  that if you’re playing the LEGO adaptation, you already know your Harry Potter pretty well. The tone is light hearted and the expressions really amp up the charm, whilst also helping to separate the students from their equally short teachers.

The story of the game is set in Hogwarts. It’s a basic castle with bright textures and the odd LEGO objects or bricks scattered around. This makes it a little easier to notice some of the puzzles that might be hidden from view – when a bricks and mortar wall has a bright plastic window in the middle of it, you can guess it’s not there just for decoration. The soundtrack is also at it’s most basic here – a regal sounding melody will follow you wherever you go, with the game saving the quicker paced tunes for the many boss fights scattered throughout. 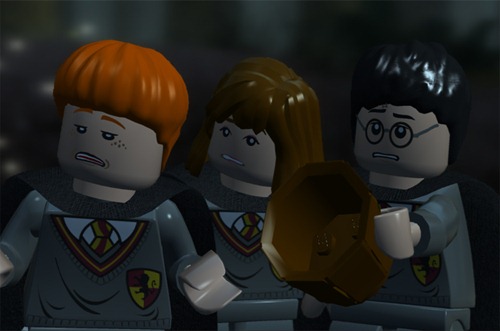 If you dawdle and try and solve everything before tackling an actual level, the game can stretch on for hours – each year is split into six basic levels though so it’s still a very brief retelling of the story. Like I mentioned, you’ll only want to be playing this if you already know the story beforehand. EA Games bring out a new video game tie-in with every Harry Potter movie release, but you’ll often get little more than a Hogwarts simulator with those.

There is of course a lot of daylight between these two types of adaptation however – while the film’s tie-in games try to be interactive movies (and lose a lot of the story in translation), this game doesn’t try to be anything more than a fun, Harry Potter themed electronic LEGO set for your kids to play on the TV. Of course if you’re a Harry Potter fan, whether casual or hardcore, you’ll have a lot of fun too. There’s a tonne of humour and charm packed into this title. It plays best with two people too, so grab a friend, sit back and go to town with building your own levels before tackling Year Two’s Chamber of Secrets…