Harbor Moon is an original graphic novel written by Ryan Colucci (who also edited/produced the project) and Dikran Ornekian, in collaboration with Polish artist Paul Sambor and several other talented individuals. Published by Arcana Comics, this unique visual horror story is very much a team effort; there is a strong sense of collaboration conveyed from within every darkened, blood-splattered panel. Colucci’s Spoke Lane Entertainment have certainly excelled in taking a well-known genre and turning it on its head: Harbor Moon is refreshingly different, matching buckets of gore with equal amounts of deadly beauty. 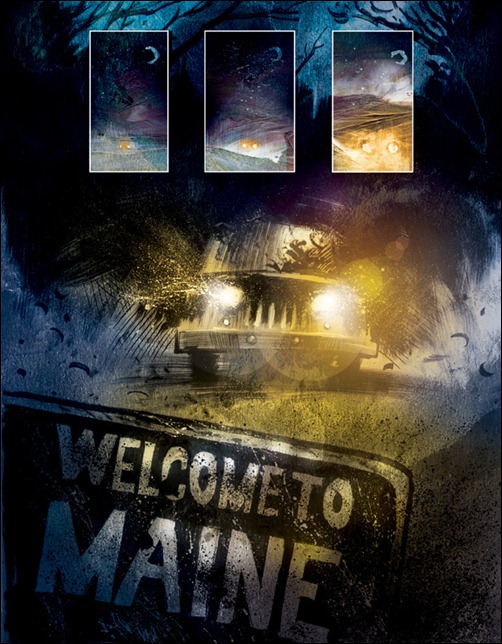 The majority of the narrative takes place within the fictional town of Harbor Moon, Maine, where main character Timothy Vance has journeyed to find his long-lost father. The artwork – which often brought to my mind a mixture of Australian comic book artist  Ashley Wood and the 1993 PC videogame Gabriel Knight: Sins Of The Fathers – deftly conveys this isolated, secretive town with a haunting grimness and firm sense of reality that is difficult to shake. There is something decidedly Hitchcockian about the locals too: just as Tim is made to feel like an outsider, so too is the reader. This adds a wonderful sense of danger to the proceedings, emphasising the potential deadly nature of every character that is introduced. This kind of smouldering ambience doesn’t come cheap. Luckily, Harbor Moon never skimps on atmosphere.

With a title such as Harbor Moon and a front cover featuring gaping fangs, it is hard to mask for long that this is a tale involving werewolves. Luckily, this revelation is quickly dispensed with and bypassed so that the storyline can gain momentum and as a result its own identity. Much like the murky artwork, the lines between monsters and men are blurred here. The overall experience is all the better for it too.

The mystery of Harbor Moon is certainly a gripping one, but that isn’t to say that everything always comes together perfectly. The artwork proves occasionally inconsistent, stunning when it works but clumsy when it doesn’t. Surprisingly, darker panels with purposely obscured artwork consistently manage to convey images even when there aren’t any present. I enjoyed the way this cinematic device was implemented, with the mind’s eye filling in any gaps. However, this technique requires a fine balance that can often tip into incoherence and I would be lying if I didn’t admit that the layout could sometimes become confusing, with the action difficult to follow.

Other issues stem from the range of art styles used. This is a project that isn’t afraid to alter it’s own visuals from page to page, atmosphere taking precedence at all times. The obvious downside to this is that it can be hard to identify a character upon first glance. One page springs to mind near the end where the main protagonist and antagonist are featured in side-by-side panels. With both dark-haired men sporting generic clothes and chiselled jaws, it becomes difficult to differentiate between the two. This isn’t a terrible problem, but when it does occur it can really muddle up the story for the less observant reader. I enjoyed the book a lot more the second time I read it, managing to take away a far greater understanding of the story by simply paying careful attention to every single page.

Overall though, these negative aspects will in all likelihood significantly pale when this gorgeous graphic novel finally finds its way into your hands. Oversized and glossily printed, that first flick-through promises so much, and it largely delivers. The story appears generic at first but soon transforms into an entirely different beast. Not everything is as it seems with Harbor Moon and I doubt the various twists and turns will displease fans of the genre. Innovation is plentiful, the wider universe merely hinted at. Risks are taken and most of them pay off. Whether via a spin-off or sequel, I truly hope to revisit the world of Harbor Moon again soon. A promising debut.