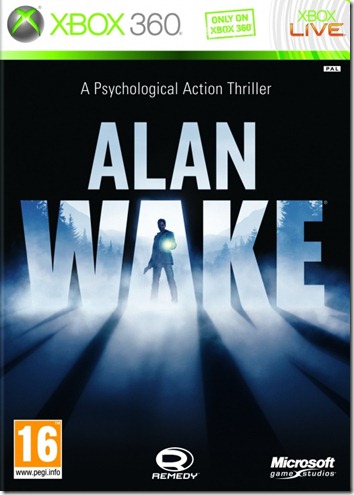 Alan Wake, Remedy Entertainment’s first venture since Max Payne 2: The Fall Of Max Payne, wasn’t exactly the gaming world’s best kept secret upon its release earlier this year. The hype machine surrounding the title, plus an ambitious viral marketing campaign, created sky-high expectations that would be difficult to fulfil. Thankfully, Finland’s finest have succeeded, by creating one of the most cinematic and eerie gaming experiences to date.

You are alone in the dark woods at night, light is your only friend and the feelings of fear, dread and seclusion are now as natural to you as the feeling of your pillow at night. It’s okay to be scared of the dark. In fact, you’d better be scared, because if you’re not careful, you’ll disappear into it – forever. Clutching onto your flashlight, you wish you had eyes not only in the back of your head, but the sides too. An abrupt noise sends a shiver down your spine, causing your heart to beat faster and faster, your chest becoming so tight that every heavy breath begins to hurt.

You hear the noise again, only this time it’s closer. Up ahead you see a street light, they can’t get you in the light so you run, run as fast as your trembling feet can take you. The sounds get closer, you can feel whatever it is gaining on you as you skip over logs and stones, just about managing not to trip. At last, you escape to the light, you’re safe, they can’t get you here. You lean against the street light and laugh with relief. Suddenly, the light flickers and then dies… everything goes dark again. 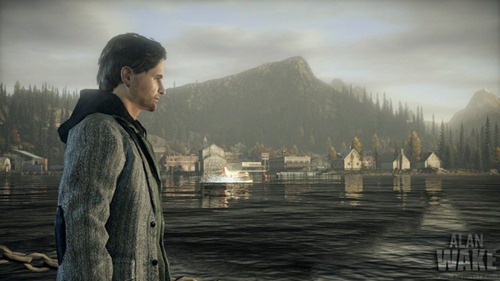 The dark and broody Alan Wake is a successful author from New York City. Due to a battle with writer’s block, he hasn’t managed to put pen to paper in over a year. At his wit’s end, he begrudgingly decides to take his beautiful wife Alice on a vacation to the sleepy forest town of Bright Falls.

As you’d expect, not all goes to plan and the break turns out to be anything but relaxing. Alice goes missing and Wake ventures into the wilderness to find her. On the way, he discovers pages from his latest novel coming to life – a novel he doesn’t even remember writing. This leads to a presence called ‘the darkness’ taking over Bright Falls, gradually turning the local townsfolk into demonic creatures. If Wake ever wants to see his wife again, he must battle the darkness and get to the bottom of the mysterious manuscript.

Alan Wake is a third person action/adventure with all the makings of a psychological thriller. The clever narrative is about as intriguing and as gripping as any current feature-length film or TV series, which is refreshing to see within the video game medium. In fact, it borrows heavily from TV shows such as The Twilight Zone, Twin Peaks and The X-Files. Broken up into six episodes, all begin with the obligatory ‘previously on Alan Wake’ segment.

You control the man himself, famous author Alan Wake, broody, cynical and sometimes highly unlikable. Everything is seen through his eyes -  literally in some segments – and his narrated thoughts accompany you throughout. He makes the transformation from slightly spoiled and self-important grump to gun-toting, forest-adventuring demon killer with surprising ease – he hadn’t even used a gun until now. However, the unconditional love he shows towards his wife and the pain her disappearance causes creates a great sense of empathy. Like him or not, you want him to succeed.

Wake’s enemies are creatures called the ‘Taken’, formerly Bright Falls locals, now possessed by the darkness inside them. They jump out, usually in hordes carrying axes and knives, some larger and more difficult to kill than others, but unusually, they are only ever lumberjacks or police officers. Objects such as barrels and vehicles are also possessed by poltergeists. The only way these demons can be destroyed is with the use of light – it’s literally a battle between light and dark.

The combat system is unique and inventive. You’re given the traditional firearms such as a pistol, shotgun and rifle, but it’s actually your ever-present flashlight which does the most damage. You can’t rely on just shooting your way out. There are certain tactics key to survival and this actually makes the whole combat process much more fun. Enemies are protected by a surrounding black mist. Shining your light onto them gradually destroys it and only then are they vulnerable to your attacks. It’s not as easy as it sounds though: your light is battery-powered and the boost quickly sucks the energy from it. When the power runs out, you can either wait for it to recharge (very difficult when cornered by groups of Taken) or quickly add a new battery by pressing Y – if you have one that is.

This process is slightly odd at first, but quickly becomes second nature. There is a certain art to pulling it off when you’re surrounded by larger groups, but it certainly leads to some exciting battles.  Often, electrical generators are positioned nearby which shine temporary light onto your enemies and a feature called the cinematic dodge comes in handy when you’re being ambushed. Pushing the left bumper and a direction, if timed correctly, dodges out of the way of attacks – and with style. I found this especially important when I ran out of ammo early in the game and running to the nearest safe haven of street light (sometimes quite a distance away) was the only way out – which would have been easier if Wake could sprint longer than a second before losing his breath. Still, this keeps the combat feeling fresh and exciting.

The best weapons aren’t actually firearms, but rather the flare gun and flash bangs. These offer relief when facing big groups (or even a possessed tractor… yes, that’s right!) No tactical fighting, just blast and they’re gone. It’s here where the game really comes into its own. The game also includes brief elements of driving, putting you behind the wheel as you plough down the Taken at high-speed. This is actually a lot fun, but unfortunately it isn’t utilised as much as it could have been.

The locations are, in a word, stunning, even in the dark. Bright Falls is quite reminiscent of David Lynch’s Twin Peaks, a charming little town with dark undertones. You spend most of the time venturing through the forests, which are so vast and eerie, you constantly feel under threat.  The fabulous lighting effects also enhance the already terrifying mood.

For most part, the narrative is linear and the pacing is top notch, even if the game itself is regrettably short. The included episodic breaks are a unique touch too and are nicely placed throughout. Wake is the only character with much depth and development in the story, but the supporting cast offer brief respite from his moody ramblings and often add some nice dialogue exchanges. There are times throughout the game where you will fight side by side with another character too, although they expect you do most of the dirty work… such as pressing an elevator button. The models have a nice realistic look to them, but the poor facial expressions sadly let them down.

The main crux of the story is revealed as you progress, but if you want the whole experience, you have to go out and find it. Wake’s manuscript pages are scattered throughout the game and include secrets as well as more detailed plot information. Hidden radios feature local talk shows, giving you a brief peek into the world of Bright Falls, whilst TV sets show an awful Twilight Zone rip-off. These inclusions don’t add anything substantial to the story, but do offer some brief humour. The only way they can be found is by meticulously exploring the environment and venturing off the beaten track, which can be very dangerous. The game is split up nicely, with non-combat daytime sections at the start of each episode. These are basically used to break up the tension and push forward the narrative.

What really sets Alan Wake apart is the atmosphere. To fully experience the game, I recommend you play it with the lights out and your sound system turned up to the max. Every little sound and nuisance creates tension and Petri Alanko’s  subtle yet creepy soundtrack constantly rumbles underneath before exploding out of nowhere. The game just screams tension. Even during quiet sections there is always a wonderful feeling of foreboding and terror.

Sadly, the story and even the game itself lacks any real surprises or twists. Some of the larger battle sequences don’t receive the kind of pay off you’d expect. The end of the main game also feels slightly weak and empty, especially when you consider how much the protagonist has been through. However, the first downloadable episode picks up where the main game ends, so hopefully everything will be expanded upon. 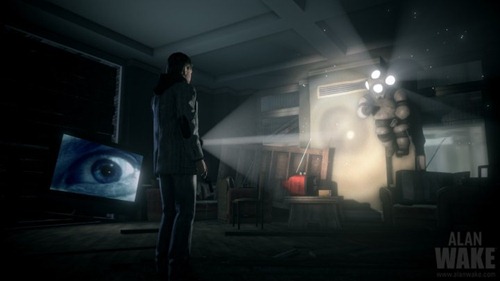 The Signal is the first of two additional episodes (the second, entitled The Writer, is expected to be released in the fall) and as previously mentioned, picks up where the main game finishes. It’s understandably short, but frantically packs a lot into the time given. It is by no means just an extension of the original game either. Instead it is more strategy based, with an emphasis on the use of light and movement rather than combat. It’s actually a fun game in its own right and is fully worth the 560 Microsoft Points.

Overall, Alan Wake is a great example of modern video games coming into their own as truly cinematic experiences. The shrewd storytelling, fantastic pacing and eerie atmosphere create an unforgettable experience for gamers to fully indulge themselves in. The controls take a little time to get used to and unfortunately the lack of any real surprises, coupled with the short length, diminish the end result. Regardless, Alan Wake is an enthralling adventure that players will definitely struggle to put down.