The A-Team is a 2010 cinematic remake of the hit 1980’s TV show of the same name, which of course famously starred Mr. T (Rocky 3). For those unfamiliar with the source material, the ‘A-Team’ were a group of ex-United States Army Special Forces, wanted for a crime they didn’t commit. Running for a total of 98 episodes, the original show was popular for its cartoon-like violence and formulaic tendencies. Hollywood film execs obviously thought this cult show would translate well to a modern audience with this high-gloss remake. They were wrong.

I will be perfectly honest and admit outright that I am not overly familiar with the original show, beyond whistling the theme tune on occasion. However I did revisit it before watching the remake to give myself some context. Still, I feel it is important to judge the film on its own merits. Surely it is largely intended to be viewed by people who haven’t seen the original show, therefore exposing the franchise to a whole new generation of fans.

In 2010, the concept for The A-Team just doesn’t work as well as it should. The new cast certainly looks the part, with Liam Neeson as Colonel Hannibal Smith, Bradley Cooper as Faceman Peck, Quinton Jackson as B.A. Baracus  and Sharlto Copley as Murdock. The opening moments even have a silly, nonsensical charm, throwing the team together with the flimsiest chain of events possible and in the process preparing viewers for the rather brainless two hours ahead of them. 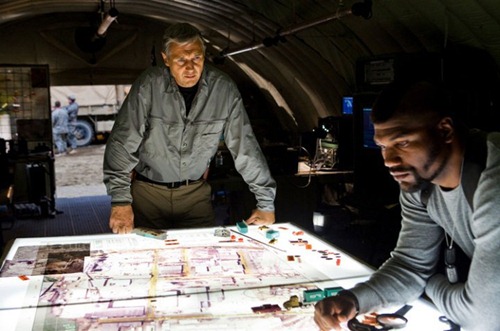 Everything is going great (albeit superficially) until the team gets into a helicopter and the film proceeds to bombard the viewer with a shockingly fake CGI chase sequence. This is a reoccurring scene throughout the film, mostly used to drill home the joke that B.A doesn’t like flying, before showing us the latest reality-breaking display of computer graphics replacing anything remotely tangible or enjoyable on screen. One example featuring a parachuting tank is supposed to be unbearably exciting. Instead, I had to suppress a yawn. Isn’t this the type of film that is crying out for as much practical shooting as possible? The sad fact of the matter remains that the remake’s cartoonish violence is now outmatched by its even more cartoonish visuals. Even within its own far-fetched reality, the film fails on every basic narrative level.

Unless you hadn’t already guessed, it’s really hard to buy into anything that The A-Team offers. I haven’t even discussed the plot yet… because for all intents and purposes, there isn’t one. Some half-hearted attempts are made to wrap the action in a story encompassing an opposing evil special forces unit, stolen U.S treasury plates and various double-crossings… but it all boils down to the next dull moment of attempted spectacle. Even worse, the scriptwriters couldn’t just let this dumb action movie remain dumb. Instead, we are forced to listen to conversations about the validity of killing people (quoting Ghandi!), watch the preparation of ‘plans’ that make no sense at all and endure forced romance as the camera pans between Bradley Cooper and token female cast member Jessica Biel, who has certainly seen better days as an actor.

All of these faults combine in the film’s final moments to create one of the most mind numbing ending sequences I have ever seen. There is a small glimmer of hope offered when B.A. Baracus overcomes his reluctance to kill, shaves his head and dives back into the action. Sadly, said action involves hundreds of CGI cargo containers inexplicably blowing up and falling everywhere. It is an explosion of computer generated excess, obliterating what little chance the real components of the film had to contribute anything worthwhile in the first place. Of course, the team had a plan all along… involving fireworks, cars that drive themselves and a helmet made of melted Kevlar, complete with a voicebox made from a children’s toy and numerous sachets of ketchup. Don’t ask.

In the end, The A-Team has little to offer the modern cinemagoer. The actors themselves are fine to a degree: there is a certain likeability to these reinvented characters that just about pulls you through the nonsensical plot, which still manages to overrun by a good half an hour. With the occasional nod to the show’s iconic theme tune it just about gets away with being disappointingly average. It isn’t the worst film in the world, but it adds insult to injury by being a remake of something that many people will remember fondly from their childhoods… perhaps less so now. My fondest memory of the remake will probably be Jessica Biel’s character having a Steely Dan ringtone on her mobile phone.