DeathSpank is the creation of Ron Gilbert, one of the brilliant minds responsible for the perennial AMO favourite Monkey Island series. His development team Hothead Games released the well received Penny Arcade Adventures: On The Rain-Slick Precipice Of Darkness – Episode One back in 2008. Their latest title is DeathSpank, a downloadable only hack and slash adventure… and it’s bloody funny!

Humour of course is entirely subjective, with one man’s subtle wit another man’s fart gags. DeathSpank (mostly) forgoes the toilet humour in favour of witty and well delivered dialogue. Michael Dobson injects the character of DeathSpank himself with so much pomp and machismo, he sounds like a cross between The Tick and Captain Qwark from Ratchet and Clank. DeathSpank has the enthusiasm of a child, making minor tasks such as a simple delivery quest sound every bit as heroic as slaying a dragon.

The game concerns the titular hero’s quest to recover The Artifact, only for it to be stolen along with a group of children from the nearby orphanage in the town of Pluckmuckel. DeathSpank must complete quests for the locals, rescue the orphans and defeat the pompous Lord Von Prong and his band of Orques.

Combat is reminiscent of Diablo. Some fights can be challenging, requiring the use of elemental weapons such as the brilliantly named ‘Fire Axe 2: Fire Harder’. A justice meter builds up that, when full, can be unleashed as a special, weapon specific attack. Loot is the typical carrot-on-a-stick affair like many games of its type, with drops coming thick and fast to keep you hacking away.

"Using weapons twice in a row slows down justice and is a social faux pas."

A colourful, comic book aesthetic is pleasing to the eye with plenty of variety between zones, keeping things fresh. There is lots of backtracking involved however, although a fast travel system is accessed via various portaloos dotted around. Okay, there is some toilet humour. The musical score is suitably heroic, although it’s the dialogue that really impresses. All NPCs are voiced to great effect, with some hilarious conversations taking place as  result, a personal highlight including a philosophical cow. 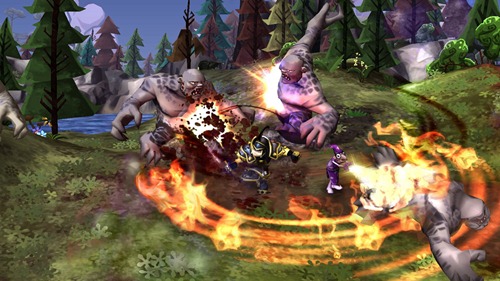 The multiplayer component is the only major disappointment. Drop in co-op play is as simple as a second player picking up the controller and taking control of Sparkles the wizard. Sparkles can attack from range and can also heal the shared health bar. However, with many encounters defeatable whilst playing solo and with no difficulty spike for introducing a second player, the co-op mode just feels tacked on.

For £9.99 on PSN and the XBLA’s 800 MS points equivalent, DeathSpank is well worth the asking price. Clocking in at around fifteen hours with sidequests, it rivals full price releases in terms of value for money. Although, for the laughs you’ll get (assuming your sense of humour transcends Chuck Norris jokes), you just can’t put a price on it really.