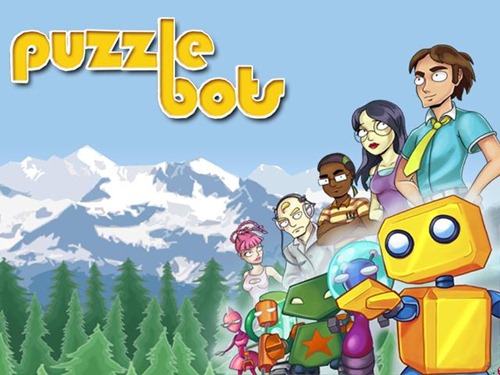 Puzzle Bots is the latest point ‘n’ click game from Wadjet Eye Games, a company I previously came across during my time reviewing the classic Blackwell trilogy of games for Hardydev.com last year. I therefore decided to put myself forward as a beta tester for the studio’s new game Puzzle Bots last month. As soon as I started playing, I was blown away; gameplay and graphics were delightful even in those early beta stages. I knew I would have to review the final build on AMO when it released, which brings me to my review. Puzzle Bots rocks!

Something strange is afoot at Dr. Hugo’s Factory for Making Robots. Absent minded inventor Zander is the first employee to finish his robot, Hero. But are the robots really all that they seem? Furthermore, why are there discarded toys everywhere? And what is big boss Dr. Hugo hiding from his inventors? The premise is a good one, light-hearted in it’s approach but enticing enough to make its unravelling a breezy pleasure. There is even a satisfying love triangle subplot at work. 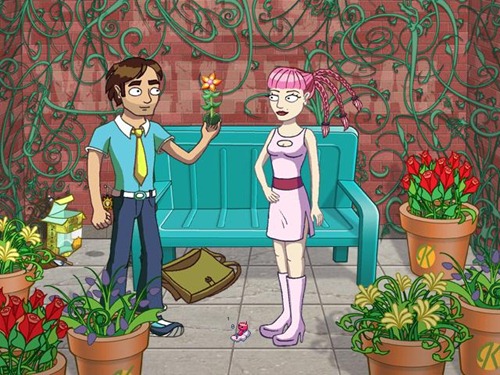 The graphical quality hits you immediately. Puzzle Bots may be built on the aging AGS engine, but the graphics are quite simply fantastic. The visuals constantly reminded me of the graphical style of Matt Groening’s ‘Futurama’. I think the key here is that the human characters are shown on a large scale, whereas in other AGS games they are usually smaller on a vaster background. This unique approach allows the introduction of the tiny robots in the same locations to have a greater impact on the player. The sense of scale is very impressive. 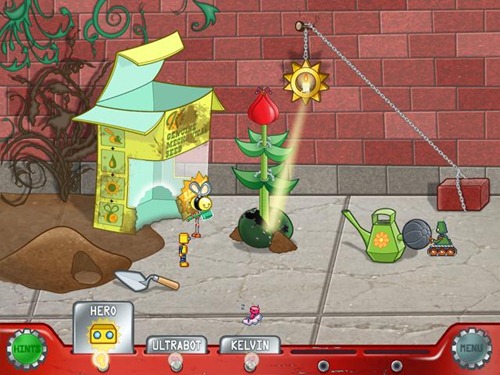 Each robot in the game has its own unique ability: this is the real meat of the game, hence the title Puzzle Bots. Hero can lift items. Ultrabot can push heavy objects. Kelvin has a flamethrower. Ibi can swim and tow objects underwater. Bomchelle can, surprise surprise, throw bombs. Switching between robots is instantanious and all of the little guys (and gals!) must be used together to overcome the various challenges that the game throws at you. There is a real sense of teamwork throughout, with the individual personality of each robot shining through. Controls are a straightforward affair. You simply point the cursor over hotspots and click; the robot currently selected will do the rest. The user initiated hint system also works really well, giving basic clues and taking a moment to recharge before it can be used again. 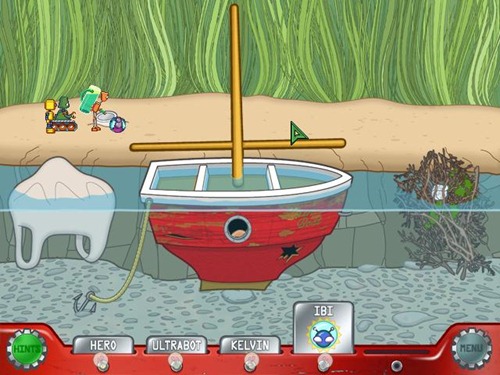 Luckily, these challenges are logical and brain teasing without resorting to trial and error gameplay. Everything makes perfect sense within the game world, allowing an almost tranquil yet steady pace where the player feels satisfied that they are always progressing. There are some puzzles during the final level that I felt broke this pattern, which was a shame, but overall the name of the game here is fun. I was grinning constantly throughout. Please note: you never control the human characters at all. Instead, the human cast is used to provide stopgaps between levels. These cutscenes are never intrusive and often evoke a well deserved chuckle due to sharp script writing and strong vocal delivery. 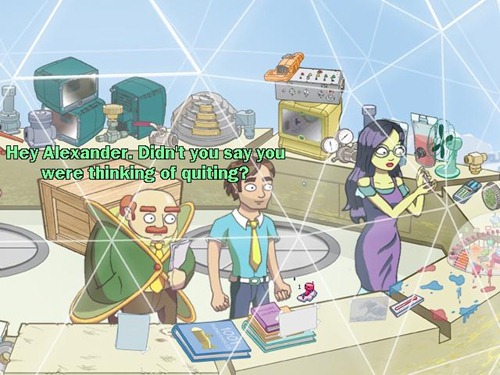 It doesn’t hurt that the voice acting is fantastic either. The central human character Zander is voiced by Abe Goldfarb, who is fast emerging as one of adventure gaming’s brightest new vocal stars, especially after his accomplished performances as Joey Mallone in the Blackwell games. Wadjet Eye founder Dave Gilbert also lends his vocals to several characters. The result is a stellar effort all round. The choice to have the robots talk in bleeps and blips works well, with the subtitles providing plenty of humour whilst adding to the retro feel. One small misstep is when Hero actually speaks human: it doesn’t sound as affective as when he was speaking in his native tongue. Still, this is a small complaint. The music is also infectiously catchy. It may not vary much, but this only serves to bury the tunes even further into your head. 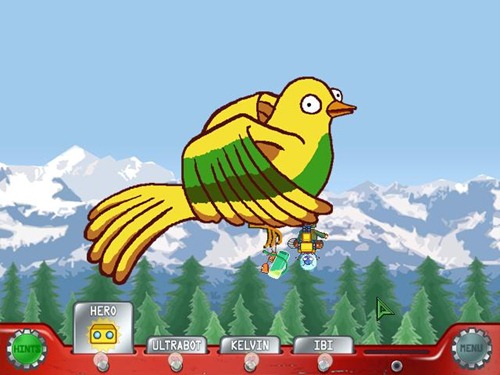 Overall, Puzzle Bots is a fantastic addition to the Wadjet Eye stable of games. Designer Erin Robinson (Nanobots) is a perfect fit with Dave Gilbert’s studio. Together, they have created a game that is insanely addictive and fun. The only real let down isn’t that damn bird puzzle, the occasional minor bug or even Hero’s slightly off-sounding human voice. It is the fact that you will wrap this game up after 4 hours or so, with your face still aching from all the smiling, hungry for more. What it sacrifices story-wise it more than makes up for with rock solid gameplay. Undoubtedly, Puzzle Bots is one of the best indie offerings of 2010. I for one cannot wait to play the sequel!