This review actually began life as a comparison piece between Battlefield: Bad Company 2 and Call Of Duty: Modern Warfare 2. After getting to polishing off point though, I soon realised that BC2 is so awesome, it deserves it’s very own arrangement of words. Plus I have strong feelings of aversion toward Bobby Kotick and his merry band of minions at Activision, and such feelings were painfully obvious. 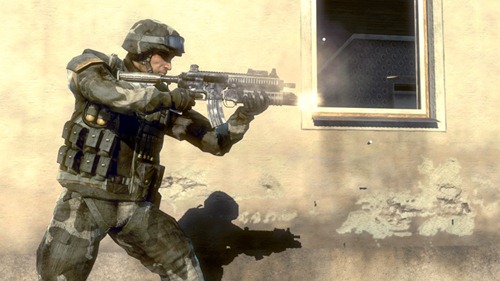 Alas! A linear campaign and frustrating multiplayer need not be discussed! For my ears are still ringing from a building caving in on itself on top of my head, and such delightful things need to be brought to the attention of the world.

I’ll get to the multiplayer a bit later on, but there’s a certain move you can pull to off your enemy which completely sums up the wonderful chaos of this package. Forget your headshots and your knife kills: levelling a building on top of someone’s head – a ‘Destruction 2.0’ kill – is the absolute pinnacle of warfare here. The groans of metal girders giving way, a klaxon to your ears to evacuate, followed briefly by the screams of your squad mates as they scramble to escape a shower of bricks and mortar. Thrilling, anarchic, hilarious.

And it’s this wanton destruction that runs through the blood of BC2. It takes a while to realise that you really shouldn’t be lining up a shot, and instead should be aiming some explosive projectile toward the cover instead. Throughout the campaign mode you are frequently given ammo drops, so running out of things to blow other things up with isn’t a problem. First person shooter favourites the explosive red barrel litter the levels, although for once they are welcome, and just add to the bedlam.

Not enough grenades to take down that marauding Armoured Personnel Carrier? Just blow up the bridge instead and watch it take flight down the mountainside. The explosions throughout look quite incredible, without any slowdown even during the most hectic of fire-fights. DICEs Frostbite engine first debuted in Bad Company and was refined in Battlefield 1943, leaving nothing that can’t be blown to smithereens.

Presentation is striking all round, with Prestone Marlowe and co. visiting snow capped peaks, large deserts, towns that are screaming to be blown to bits and lush tropical jungles. There is a slight graphical glitch where the background occasionally pixellates, although this may be specific to the 360 version. If anyone has any experience of the PS3 or PC versions any comments on their experience would be greatly appreciated. Whilst not looking quite as rich in colour as Modern Warfare 2, it more than makes up for it by allowing more freedom to approach objectives. It does feel slightly linear, and can be accused of funnelling the player down corridors but generally there is a pretty big playing field to go about blowing things up as you see fit.

The campaign focuses on Russians being naughty (do they really have to be the bad guys in everything!?) and feels slightly lacklustre. Sure the action is second to none, but it lacks that sense of spectacle and is largely forgettable. It is a great 5-6 hour blast, it just feels lacking when compared to Modern Warfare 2. Yes, I know I wasn’t going to compare the two, but comparisons are inevitable. Thankfully, your squad-mates are genuinely quite funny throughout, (especially with a few sly digs about heartbeat monitors and snowmobiles) doing a fairly decent job most of the time but not so much so as to negate you being there in the first place.

It also sounds incredible. If there was ever a game to convince you to take the plunge and invest in surround sound then this would be it. From the ‘ffffwwwwwwwummps!’ of a bullet just missing your head, or the muffled resonance when an explosion goes off around you, it grabs your head and screams immersion into your ears. This reverberates around your ear drums even more so during the quite sublime multiplayer, a mode that makes this nothing less than an essential purchase.

There are four modes available from the off, with Bad Company veterans recognising the Rush and Conquest modes, tasking you with taking two communication stations before moving on and taking and holding points on the map respectively. Squad Rush and Deathmatch complete the selection. Gigantic maps allow for large-scale warfare, with a number of vehicles including quad bikes, tanks and Blackhawk helicopters adding to the pandemonium that occurs during every game.

One instance left me stunned. My squad were taking a pasting from a pesky Blackhawk helicopter that refused to get shot down. A wily team member managed to plant a tracer dart on said aircraft, allowing rockets to home in on the blight from the skies. It was heading directly for me. The pilot had gone kamikaze. I launched a rocket with blind hope and a squeaky bum. The rocket connected, the helicopter began to spin wildly with flames pouring out of its exterior. It smashed into the earth, a few feet from my position with a cacophony of noise resulting from the explosion causing the colour to bleed from my screen. It left me disorientated for a few moments, and a little bit shaky. Wonderful stuff!

Four classes (not including vehicles which are effectively considered a class) can all be levelled up for specific unlocks, such as more powerful guns and specialisations to improve accuracy for example.

The campaign is a good yarn, but is largely forgettable. The multiplayer is an astonishing, chaotic, satisfying, addictive triumph and is well worth the purchase price alone. A quick perusal through the in-game store reveals updates within the next month, all for free.

Quite simply put, an essential purchase for online shooter fans.