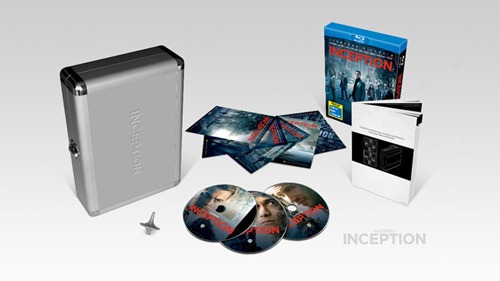 Inception has finally been released on DVD and Blu-ray, allowing eager fans to enjoy the film once more and newcomers to see what all the fuss is about. The UK Limited Edition comes in a metal briefcase containing a Triple Play copy of the film (Blu-ray, DVD and Digital Copy), a PASIV (Portable Automated Somnacin IntraVenous) Device User Manual, art-cards and a spinning top.

END_OF_DOCUMENT_TOKEN_TO_BE_REPLACED

Once every so often a film hits cinemas and changes the landscape forever. Whether it is through the use of special effects, star power, scripting or acting, some films are immediately lifted to the pantheon of greats and set a new precedent. The Matrix set the tone for post-millennial Hollywood with its dizzying mix of computer graphics, story and mythology building – at least until those two awful sequels surfaced. This past year may have witnessed two such landmark events. December 2009 saw the release of Avatar, the special effects spectacle that broke box-office records. Summer 2010 has Inception.

END_OF_DOCUMENT_TOKEN_TO_BE_REPLACED

FEATURE ARTICLE – Spinning Tops and Unicorns: The Ending of Inception

I finally went to see Christopher Nolan’s Inception last night and it blew my mind. I thought it was phenomenal: a big budget science fiction film that deftly manages to grip the minds of a mainstream audience. It is a big film with even bigger ideas. Leonardo DiCaprio is fast becoming one of the finest actors of our generation. Following Shutter Island, it is hard to argue against the fact that he has dominated the silver screen in 2010, mixing natural charisma with genuine humanity. Yet after Inception finished, I knew the one thing on people’s minds and lips as they left the cinema would undoubtedly be the ending… (Warning: Spoilers!)