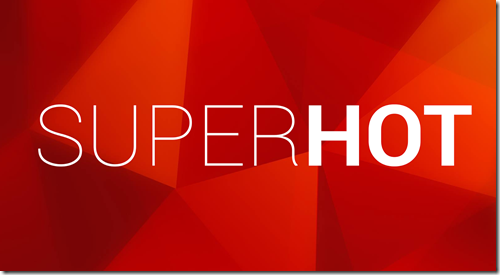 Superhot is a first-person shooter where time moves only when you move. Starting out as a 7 Day First Person Shooter (7DFPS) game jam project in 2013, a Kickstarter campaign launched the following year was successfully funded within 23 hours and went on to raise over $250,000. Superhot is the end result – a game where you can dodge bullets and take out your enemies in glorious slow motion, one step at a time.

Imagine a world of white concrete populated with humanoid figures made of red glass. You jump in slow motion from a high balcony down to the ballroom floor below as three enemies walk away in the opposite direction. As they begin to react to your sudden (to them at least) arrival, you strike them down. One. Sliced in half. Two. Arm severed. The third manages to pop off a shot, but you slice the bullet in half with your katana before chopping his head off. All of a sudden, more enemies appear on the balcony above. You throw your katana at the first to appear as you pick up an assault rifle a recently shattered enemy dropped on the floor. You’ve already fired three shots at the enemies running down the right-hand side staircase as the katana impales its target before embedding itself in the wall behind him, quivering. Moments later, all enemies are dead, reduced to mere shards of broken glass. Success! SUPER. HOT. SUPER. HOT. SUPER. HOT.

That’s just one way this particular level can play out… and it took several failures and retries to get there. But when the replay video pops up at the end of a level that has been successfully completed, played back at regular speed with the slow motion effect removed, the game’s title chanted like a mantra… it’s glorious. You feel like a total badass. That’s the power of Superhot. Slow motion has been done before in video games (Max Payne 3 did it rather well) but Superhot just does it better. Trailers and screenshots don’t do it justice. This is very much a title that needs to be experienced to be fully appreciated and understood.

The plot is deceptively simple and the game itself very ‘meta’. Superhot is presented as a game within a game. The main menu is an old-school DOS prompt and ‘superhot.exe’ is a cracked game sent to you by a friend. After playing the first few levels, the game glitches out and disconnects. The attention to detail on the main menu is impressive – there are several basic DOS-style mini-games and even a fake chatroom where hackers discuss the Superhot game. Your friend gets in touch regularly to help you access new levels and chat about what you’ve experienced so far. At one point, the creators of the game even realise you’re playing a hacked version and make you quit to your desktop (don’t worry, you can open the game again afterwards to carry on). It’s a bit unsettling but that’s the idea.

The ‘superhot.exe’ levels themselves lack any kind of overarching story, but each situation is beautifully laid out for you. There’s a bar where everyone is trying to kill you, including the barman. There’s an elevator where you’re surrounded by four enemies… who will immediately try to kill you. You get the idea. The twist is that moving – or indeed even turning to look around – advances time. Move slowly and time moves slowly. Move fast and you’ll die fast. Standing still isn’t a great idea either. Time still trickles forward, meaning enemies continue to move almost imperceptibly as bullets advance through the air leaving red streaks in their wake.

It’s a masterstroke of game design to have a world of white (everything, including cars and trains, appears to be made of concrete) with enemies made of bright red glass. Every bullet impact throws particles into the air and it’s amazing to see the damage being done as you inch forward and plan your next move. Killing an enemy is even better – they explode into multiple shards of red glass, exposing their glowing centre. The fact they’re bright red also helps to easily identify when an enemy suddenly runs through a doorway or from around a corner.

The gameplay is easy to understand and tricky to master. Moving slow is the aim of the game and it allows players to experience some incredible gameplay moments. Guns can’t be reloaded and hold limited ammunition. Luckily, you can throw your weapon (or indeed, anything not bolted down in the game world) at an enemy to stun them. Once that happens, their gun will go flying into the air. You can then grab it mid-air and continue on your killing spree. It’s a bit like a slow-motion, first-person shooter version of Miami Hotline.

Sounds awesome, right? So… what’s the catch? Well, the game itself is fairly short. It can be completed in about 2-3 hours, but it must be stressed that those hours are filled to the brim with sheer enjoyment and originality. Superhot never becomes gimmicky or overstays its welcome. Also, completing the game unlocks an ‘Endless’ mode where players can see how long they can last against an endless stream of enemies, as well as a ‘Challenge’ mode which basically consists of replaying the main levels with specific restrictions or requirements (such as completing the level within a time limit or only using a specific weapon).

However, the lack of any real soundtrack to speak of is a terrible missed opportunity. The visuals are just crying out for some kind of musical accompaniment but all you’ll hear are the same sound effects over and over again. Finally, the storyline is really cool… but it leaves a lot of questions unanswered. This isn’t necessarily a criticism, but it does feels like a sequel will arrive at some point in the future and it’s a shame players will have to wait for more Superhot content after completing such a short (albeit incredibly enjoyable) campaign.