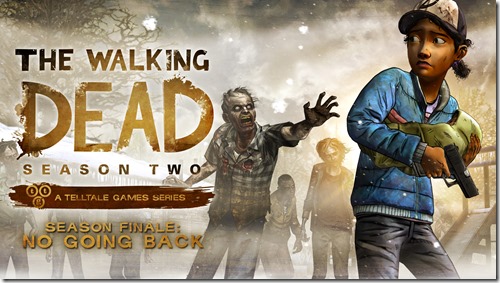 No Going Back is the fifth and final episode of The Walking Dead: Season Two – A Telltale Games Series. Following directly on from Episode 4: Amid The Ruins (which Alternative Magazine Online described as an episode “all about tough decisions and superb performances”), Episode 5 finds Clementine physically and emotionally pushed to the absolute limit as her loyalties are tested, the snow continues to fall and a vulnerable newborn baby begins to run out of time…

Well, they’ve finally done it. Telltale Games has made one of their very best episodes to date – and it’s completely unreviewable without giving away spoilers. The penultimate episode ended with a Mexican standoff (technically a Russian standoff?) that left the fate of everyone involved scarily unresolved with a sudden cut to black. The press release for No Going Back cites this as the reason why no official screenshots have been released, and kindly asks reviewers to be considerate of spoilers when posting their own. AMO would therefore recommend those who haven’t yet played to skip to the final paragraph and rest assured – this is one gaming experience you don’t want to miss.

Still with us? Fantastic. Following the aftermath of a violent shootout, Clementine and her group are left trudging through the snow with a bloodied and beaten Russian prisoner, Arvo, claiming he can lead them to shelter and supplies. Mysterious loner Jane has returned (just in time) and continues to butt heads with Kenny, who is losing his cool with increasing regularity. This frayed dynamic is the lynchpin of the entire episode, with both characters pushing and pulling at Clementine’s loyalty and sense of right and wrong.

Clementine has grown significantly with each episode of Season Two, and Episode 5 is undoubtedly the instalment that will define her for each individual player. The decisions are tougher, the moments of right and wrong are far less clear-cut and the people she (you) cares about can and will die based on her (your) actions. The experience is tenser and even more exhilarating because the stakes are raised substantially. The rare moments of downtime are filled with deafening quiet and unshakeable dread. In a world where the dead walk again, it’s difficult not to form attachments with even the most flawed of individuals. A walk across a frozen lake is one of the most tension-filled sequences you’ll find in any game this year, with split-second decisions leaving players wondering once it’s all over – did I make the right call?

Melissa Hutchison gives yet another powerhouse performance as Clementine, always managing to convey just the right balance of childlike innocence and old-beyond-her-years toughness. She’s supported by a wonderful voice cast all round with both Gavin Hammon and Christine Lakin, as Kenny and Jane respectively, chewing the scenery and flexing their impressive acting chops as they draw ever closer to swapping harsh words with physical violence. The less than cutting-edge graphics matter not one iota here – the music, art direction and incredible voice acting sells each and every emotionally charged scene. When a delirious flashback briefly reunites Clementine (Sweet Pea) with the ever-present – even in death – Lee Everett (Dave Fennoy’s comforting, dulcet tones immediately tugging at the heartstrings), it becomes shockingly apparently just how much she has grown up in such a very short space of time. It’s almost enough to evoke tears – but you’d best save them for the ending. However your adventure ends, not everyone you care about is going to make it. 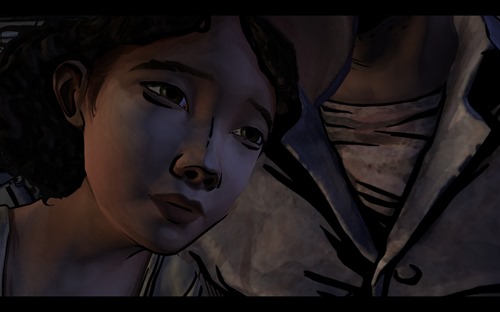 The Walking Dead: Season Two – Episode 5: No Going Back is second only to the final episode of the previous season – and that’s certainly not an achievement to be sniffed at. The writing is stellar as expected and Telltale Games has once again proven itself to be the best storytelling studio making video games today. As an interactive experience where your input actually matters and has consequences that evoke a genuine emotional response, The Walking Dead: The Game is unparalleled. What would YOUR Clementine do?