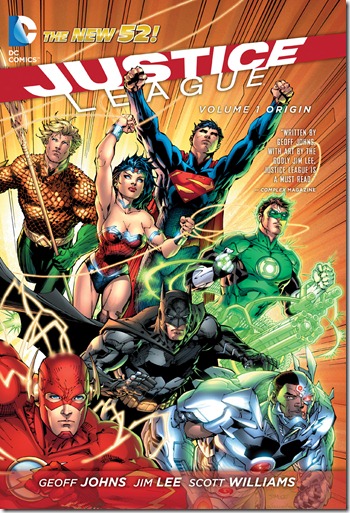 Origin is the reimagining of the – you guessed it – origins of DC’s most super team of superheroes. Part of the recent New 52 releases, Geoff Johns (Green Lantern) and Jim Lee (Batman: Hush) have returned the Justice League to their roots, taking the opportunity offered by the relaunch to give the group a brand new, action-packed beginning. One that sees alliances forged, tempers flare, laughs shared and even a new member, Cyborg of Teen Titans fame, grace the ranks.

It’s the dawn of a new age. One that is witnessing the birth of a new race of super powered humans ‘who can fly, tear through buildings and outrun race cars’. When the winged Parademons invade Earth under the command of easily one of the most heinous villains in any comic book, the colossal Darkseid, it is exactly the previously mentioned people who come to its aid.

Over the course of six collected issues, Origin introduces each member of the soon-to-be formed Justice League in a style befitting the world’s finest superheroes. Batman opens the book chasing a robed Parademon over the rooftops of Gotham – while avoiding his own pursuers from the Gotham City Police Department. However, it isn’t long before a luminous green truck barrels into them both, followed immediately by its creator, the Green Lantern. With this meeting of superheroes Johns and Lee start one of the most exciting books DC has released this year.

From the outset, Johns’ talent as a writer is evident; the story is consistently funny, dark and exciting throughout the book. Batman’s broodiness, the Flash’s confidence, Wonder Woman’s brutal innocence and all the other characters’ essential mannerisms are written in a way that does each of them justice and is a constant joy to read.

The interactions between the heroes are also incredibly well written and are exemplary of how these moments should be handled by writers. It really does feel like this is how these super-powered people would talk to each other. For example, six of the world’s most powerful beings probably would wonder what exactly Batman can bring to the table and possibly be condescending in their questioning of him. After all, in their eyes, he’s so comparatively plain. He’s ‘just some guy in a bat costume’. He can’t fly, he isn’t super-strong – he is completely unlike the other members of the League.

Similar to The Avengers (2012), there is an animosity between the heroes that creates an air of uneasiness that pours from each panel, something which is satisfyingly palpable when Superman joins the fray.

The Man of Steel makes a suitably awesome entrance, much like Aquaman and Wonder Woman after him. When each member is introduced to the book, they get time for themselves in the spotlight in which to demonstrate their capabilities. To varying degrees, each character also gets a brief introduction – helpful for those new to any of the characters – and some of the best art in the entire book devoted to them. For example Wonder Woman (after her brief introduction to ice-cream), leaps sword and lasso unsheathed, feet first into an entire squad of Parademons on a splash page worthy of Amazonian regality.

Cyborg’s introduction is much more drawn out. Sporadically throughout the first four issues of the collection, the reader is told the entirety of his backstory as opposed to being told the bare minimum in a panel or two, giving those new to the character a better understanding of him. These sections are never disruptive and always crop up at points which are appropriate for the story it is supporting to be broken up.

Lee’s artistic style doesn’t only impress on the splash pages. He does an excellent job visualising the tension that Johns writes into his characters. The costumes all look incredible – the detail in the musculature and other details in form across each character are testimony to his ability to recreate superheroes. Aquaman’s scale armour is especially impressive, the same being true for his necklace and chain connected to his trident – even if they are slightly cheesy and overdesigned.

My only reservation about Origin is just how easily Darkseid and the Parademons are dispatched. I understand the reasoning behind this though. Origin is the opening arc to Justice League so having a complex, lengthy story that a villain such as Darkseid could easily justify might be overwhelming, especially for new readers. There is also every chance that he could crop up again further down the line, or even be used in another ‘Justice League Family’ book, such as Earth 2 or World’s Finest.

Justice League Volume 1: Origin is easily one of the best books DC has released under the New 52 banner. Easily read in one seating by both veterans and those new to comics alike, Origin is a fun, exciting page-turner that is a joy to read. The book is a showcase of what skilled comic book creators such as Johns and Lee can create. Simply, it feels like everything a superhero book should be.