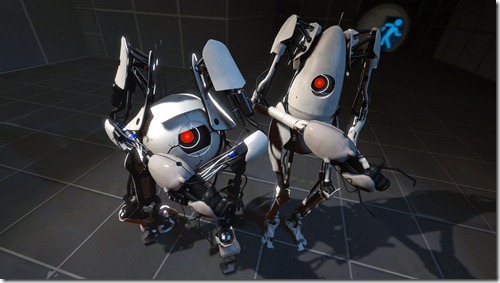 In the past, gamers could honestly protest against rubbish downloadable content – how it was disappointing, or should have been part of the main game. And sometimes DLC just plain costs too much. Valve has avoided these problems entirely – Peer Review for Portal 2 is first, incredible and second, free.

Ambiguously named Art Therapy in-game, testing bots ATLAS and P-body are once again powered up for nine new test chambers that GLaDOS calls “artwork”. The sheer value of this free pack is revealed right away – Ellen McLain’s dialogue as the passive aggressive A.I. is absolutely golden. When I realised that some of the chambers had unique dialogue for accidental deaths, I started flinging myself into lasers and muck to hear as much as I could.

“I call this one ‘Smash’. It’s an early work of primitive expression. I’m a little embarrassed at how crude it is. Still, it will smash you.” – GLaDOS introduces Test Chamber 2

Art Therapy may just have more story than any of the five original co-op testing tracks. The chambers have an incomplete look, similar to the last few chapters of the single player game. Throw in some ominous creaks and urgent dialogue and it’s pretty clear that something’s gone wrong in Aperture Science. I won’t spoil anything for people who still haven’t partnered up and tackled the new chambers, but the twist at the end will leave you in stitches.

As far as the content itself, Art Therapy has some pretty ingenious puzzles. Players will need quick reflexes and sharp thinking to progress, and are sure to get an hour or so of play if they take their time. If pushed, a person could play through with a pair of controllers on their own. Of course, nothing quite compares to testing with a buddy.

“These disassembly machines look even worse than the others. If I don’t see you on the other side, thanks for nothing.” – GLaDOS’s exit speech, Test Chamber 8

Downloading Peer Review will open access to a smaller, self-contained hub for what looks like future DLC: the new testing track is on a selection list all of its own before hitting the disassembler. If this is a taste of what’s to come for Portal 2, I won’t mind paying for future packs.

There’s not much else I can say about Art Therapy (or Peer Review, if you prefer). I could gush about how sharp it is to watch, fun to play and humorous to listen to but I’d rather you see it for yourself. In a nutshell? Valve and Ellen McLain have put a lot of effort into this one, and it shows. Plus, it’s a gem to play.

Oh, and again, it’s free. So if you haven’t played it yet, the Aperture Science Computer Aided Enrichment Center is still accepting test subjects…