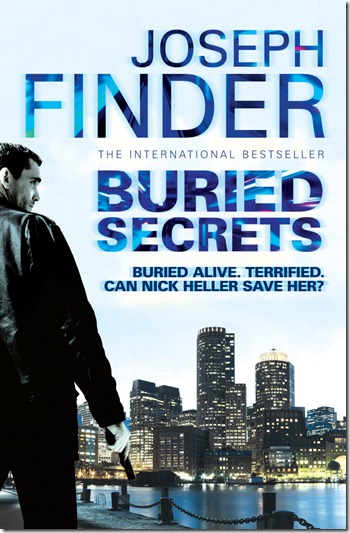 Buried Secrets is the latest book in international bestseller Joseph Finder’s new series featuring private corporate investigator Nick Heller. Heller hasn’t long returned home to Boston to start his own agency before family friend and hedge fund titan Marshall Marcus reaches out for help – his daughter, Alexandra Marcus, has been kidnapped. But this is no ordinary kidnapping. Alexandra has been buried alive in an underground casket, her desperate cries for help streaming via live video feed over the internet. Time is quickly running out…

She was in a box.
She could touch the end of the box with her toes.
She started breathing fast. Short, panicked gasps.
Her heart raced.

Buried Secrets is the first Nick Heller book I have read and it certainly won’t be the last. Although I imagine those familiar with the first book in the series – New York Times bestselling novel Vanished – will initially feel more at home, Buried Secrets works perfectly well as a standalone novel. As the story begins, Alexandra Marcus and her friend Taylor, fake IDs at the ready, are visiting Slammer – a bar located inside a luxury hotel that was formerly a jail. A man with a Spanish accent soon approaches the girls, introducing himself as Lorenzo. Taylor suspiciously exits moments later, leaving Lorenzo to buy drink after drink for Alexandra.  She truly thinks she is having the time of her life, but before the night is over she will have been drugged, kidnapped and buried alive…

Nick Heller is a hero in the classic sense of the word. His father is in prison for fraud, but he seldom mentions it… his emotions are always kept under lock and key. He will do anything to help those in need. A close friend of Marshall Marcus, he immediately springs into action the moment he hears that Alexandra is missing, instinct telling him something is very wrong indeed. His investigation will soon have him tangling with a shady senator, blinkered FBI agents and powerful attorneys. I imagine it could be rather easy when writing a character such as Nick Heller to fall into stereotype and caricature. Luckily, Joseph Finder is a strong enough author to keep Heller a believable, vulnerable protagonist throughout the novel, even when the story itself falters or trips.

In a few seconds I was ten feet away from the intruders, hidden behind a column. I inhaled slowly and deeply. Holding the shaver in my right hand and the plug in my left, I pulled my right hand back, stretching out the coiled cord like a slingshot.
Then hurled it, hard, at the back of the bigger man’s head.
It made an audible crack. His hands flew up to protect his face, a second too late. He screamed, tipped back in the chair, and crashed to the floor. I jerked at the cord, and the shaver ricocheted back to me.

Each chapter is short and sweet, ensuring that the narrative continually moves forward at a brisk pace. Nick Heller holds everything together, racing from plot point to plot point, tackling each of the obstacles placed before him head-on. When Heller explains, upon finding two intruders in his apartment, that he isn’t scared, just pissed off, you truly believe him. Cue a heard-pounding response where Heller uses the six foot coil chord of his electric razor as a makeshift weapon, cracking skulls, noses and teeth.

When Marshall Marcus reveals the true extent of his recent troubles to Nick, the plot thickens considerably and the list of possible suspects responsible for the kidnapping escalates substantially. Meanwhile, a conspiracy is slowly being revealed that could reach to the highest levels of the government. Whoever is responsible, owl-tattooed hired killer Dragomir Zhukov is losing patience. He doesn’t like waiting, and he doesn’t like keeping Alexandra alive either. Instead, he wants to watch her drown before his eyes… It is a shame then that the somewhat rushed final battle is a slight letdown.

Holding the polystyrene square in front of me like a shield, I advanced toward the motion detector, moving slowly through the eerie twilight interior, palely illuminated by the city light below and the stars above. If I was remembering correctly, the foam would block my heat signature from being detected.

Buried Secrets does exactly what it says on the tin – or the casket. It isn’t a particularly deep read, but it does more than enough to differentiate itself from the many other books on the market today aimed at a similar audience. It comes as no surprise then that Lee Child, author of the Jack Reacher novels, describes Joseph Finder’s latest series as “an action packed, full-throttle series you definitely shouldn’t miss.” The chapter where Nick disables a high-tech motion detector using only a polystyrene square and some tape is one of the most well-written passages I have read within the genre in a very long time. A pleasingly fast-paced book that, although not quite the mystery novel it could have been, still delivers where it counts – with a memorable leading man and some highly memorable action sequences.