The 7 Event Midwinterblood Blog Trail: Guest Post – “Every book I want to write is The Wicker Man…” 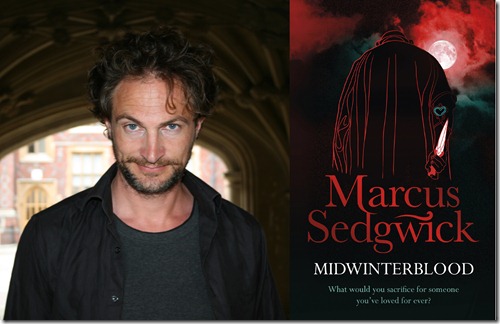 Today, Alternative Magazine Online is proud to welcome award-winning author Marcus Sedgwick as he writes a guest post about his latest book, Midwinterblood!

“Every book I want to write is The Wicker Man…”

“That’s the problem,” I said, turning to my friend Merl as we stood in front of Carl Larsson’s epic painting in the National Museet, Stockholm, a painting called Midvinterblot. Epic? It certainly is, both in size (at fourteen meters wide and six and a half tall) and in theme – the moments before the ritual sacrifice of a king amid the snows of midwinter.

I’d first seen the painting five or six years before, was struck by it, thought I’d like to write about it, and at the same time, knew I didn’t just want to write the story depicted in the painting. It needed something else, and that thing took five years to arrive. Standing once more in front of the painting, I turned to Merl and said, “that’s the trouble. Every book I want to write is The Wicker Man.” And when I say that, I’m talking about the 1973 Edward Woodward/Christopher Lee film, in my opinion Britain’s finest horror film, and not the unbelievably awful remake with Nicholas Cage.

Merl turned to me, and said four magic words: “What’s wrong with that?” I think she may have been joking slightly, but it was enough. “Yes,” I thought. “What IS wrong with that?”  And then, a few days later, back across the other side of Sweden, the way to write this book finally popped into my head. It wouldn’t be just one story about love and sacrifice, it would be seven, all taking place on the same island, but separated by time, with stories spanning from our near future, to the distant past. My two protagonists would become fourteen, seven pairs of lives, and each one tackling sacrifice in a different way.

AMO’s readers can also visit a secret page on Marcus Sedgwick’s website that adds additional content to this guest post by clicking the following link: http://bit.ly/MWB_wicker

Also, don’t forget to check out AMO’s review of Midwinterblood!