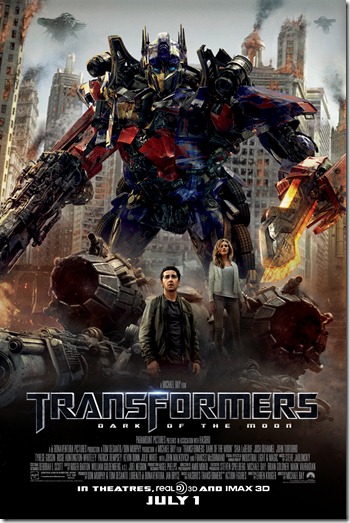 Transformers: Dark of the Moon is the third instalment of the live-action Transformers film series, directed by Michael Bay and produced by Steven Spielberg. Although I quite enjoyed 2007’s Transformers, I was extremely disappointed by 2009’s Transformers: Revenge of the Fallen. It was therefore with some trepidation that I took my seat at the cinema to watch the latest big screen battle unfold between the Autobots and the Decepticons…

Compared to the almost entirely plot-devoid previous instalment, Dark of the Moon starts rather promisingly. In 1961 an alien spacecraft crash lands on the far side of the moon, prompting President John F. Kennedy to initiate what has nowadays become known as the ‘Space Race’. However, although the official story is that the Americans simply want to beat the Russians to be the first nation to place a man on the moon, the truth is that they want to investigate the crash site. Through a mixture of real and fake footage, we are then shown Apollo 11 landing on the moon and taking a closer look in 1969.

Cutting to the present day, the Autobots are shown assisting the US military with the prevention of conflicts around the globe. Meanwhile, Sam Witwicky (Shia LaBeouf) is struggling with a life of job hunting and continual rejection, longing for the days when he worked with his friends the Autobots. As usual, his acting consists of running and shouting a lot, with some badly-timed comedy thrown in for good measure. Megan Fox’s character doesn’t return for the third film – apparently she had a pretty serious falling out with director Michael Bay – but those who require exposed female flesh alongside their mindless action need not fear.

English model Rosie Huntington-Whiteley plays Sam’s latest highly improbable girlfriend in Dark of the Moon and, although at times she tries to deliver some serious acting, the opening shot of her arse as she walks up an endless staircase pretty much sums up the entirety of her involvement within the film. Later, cars are thrown crashing through the air and explosions belch flame as we slo-mo past her character Carly Spencer, pouting with a vacant expression on her face as she stares into the distance, every single hair on her head carefully positioned as it blows in a gentle breeze.

John Malkovich as Sam’s crazy new boss Bruce Brazos is quite simply awful. Ken Jeong as co-worker Jerry Wang – who I found hilarious in The Hangover – is even worse than Malkovich, playing a character so oddball you begin to wonder if they accidentally inserted takes that were never meant to be included. Finally, John Turturro returns as Seymour Simmons – arguably the best character of the previous film – but is practically unrecognisable, his character now stale and annoying.

Although I have mostly mentioned negatives so far, there are several saving graces. The editing feels choppy at first, with scenes quickly cascading together with no real sense of pacing. However, this choppiness soon settles down and the second half of the film is much more well balanced. Also, although the human characters are badly conceived across the board, they are not forced down your throat anywhere near as much as they were in the previous instalments. The story still struggles to include the humans in any meaningful way, yet because the focus is mostly on the robots this time around, it becomes easier to forgive.

The final half of the film is basically one huge battle between the Autobots and the Decepitcons in Chicago. Michael Bay sensibly chooses to throw away any attempt at a meaningful story from this point onwards. Instead, we get high-octane sequences involving skydivers in wing-suits, Optimus Prime kicking ass and Shockwave using a ‘Cybertronian Driller’ to literally worm his way through towering skyscrapers. It looks incredible and features some of the best CGI I have ever seen. Furthermore, the action is well-framed and you can actually follow what is going on the majority of the time.

I have to give Michael Bay credit – although five minutes longer than Revenge of the Fallen at 155 minutes, Transformers: Dark of the Moon seldom drags and the action-packed second half just about works, if only as a guilty pleasure. The acting is bad, the supporting characters are nonsensical and an initially promising plot is soon squandered in favour of all-out robotic brawls. Also, the soundtrack continually rips off Inception. However, as a dumb action flick, the concluding battle just about saves Dark of the Moon from becoming a complete failure. It succeeds in the end as middle-of-the-road mindless entertainment. Let’s just hope Michael Bay knows when to call it a day…

Special thanks to our friends at Plaza Cinema for providing AMO with a complementary ticket for Transformers: Dark of the Moon.