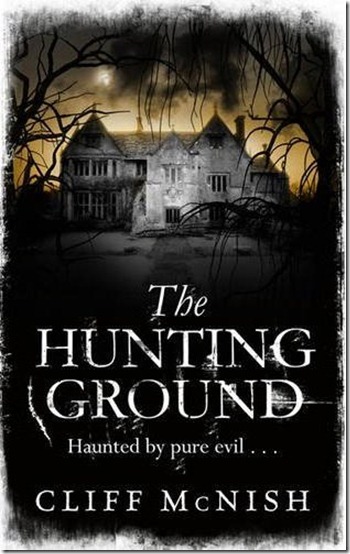 The Hunting Ground by Cliff McNish is a ghost story published by Orion Books. A chilling tale, it tells the story of young boy named Elliot who, along with his brother and father, has moved into the old and crumbling Glebe House. But little do they know that they will be sharing their new abode with ghosts both friend and foe…

The Hunting Ground wastes no time at all before introducing paranormal activities into its plot. Indeed, sixteen-year-old Elliot and his younger brother Ben barely escape the first chapter, aptly entitled ‘The Visitor’, before witnessing the mischievous antics of a dead girl called Eve. The book starts as it means to go on, building tension not by holding back, but by layering the ghostly apparitions on thicker and thicker.

The boy’s father is a renovator, paid to repair valuable old homes prior to resale. Elliot and Ben are used to strange new places, creaky floorboards and night-time sounds… but Glebe House is different. The closed East Wing is a labyrinth seemingly designed to make visitors become lost and disorientated. Throughout the East Wing and Glebe House itself, there are countless paintings of the original owner, Cullayn, hunting with a different animal (or person) serving as his prey in each.

The picture unnerved him. In the other portraits the owner’s weapons were always on clear display. In this painting it was as if the owner was hiding something – or as if he did not want to reveal his full intentions just yet. With a jolt, Elliot realised, He’s playing games with us. The toothy old owner has been dead all these years, but he’s still having his bit of fun.

Cliff McNish writes with confidence, intent on telling his own unique ghost story rather than simply falling back upon genre conventions such as slow build-ups and excessive gore. Although obviously written for younger readers (the disclaimer on the back cover claiming that The Hunting Ground IS NOT FOR YOUNG READERS is surely written with tongue firmly in cheek) this is a book that vividly portrays its setting and characters. Neither the boys, their father or the ghosts themselves are particularly fleshed out – with the exception of Theo Stark, whose revealing diary entries are sprinkled throughout – but this can be forgiven due to the breakneck pace of the plot and in particular, Elliot’s overall likeability as the most focused upon character.

Less forgivable is the development of ghost and villain Cullayn, who is suitably threatening but noticeably underdeveloped. His inherent evil is given less ‘oomph’ as a result, in turn lowering the stakes ever so slightly. Also, the middle of the book sags at times, making the transition from traditional paranormal ghost story to supernatural face-off far less smooth than it should have been. Thankfully, the inclusion of a kick-ass old lady called Janey quickly helps to refocus the narrative.

Elliot assessed the sarcastic, scheming woman in front of him. Was this really the girl Theo had admired so much? Yet, thinking about it, hadn’t Janey possessed the very same traits in those days, only as part of a more rounded personality? Perhaps the only way she’d survived the bitterness of these past fifty years was to dig deep into scorn.

The Hunting Ground isn’t the best ghost story I have read recently (that shout-out undoubtedly goes to Dark Matter by Michelle Paver, also published by Orion) yet it is still a superb read. Some readers may be disappointed that it doesn’t stay strictly focused on traditional ghosts, instead shifting focus to more supernatural elements for its thrilling conclusion. Regardless, this is a book that gripped me from beginning to end and I would recommend it to open-minded ghost story fans both young and old.