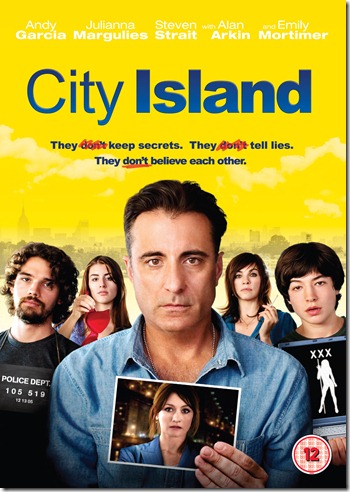 City Island is an independent American comedy-drama written and directed by Raymond De Felitta. Starring Andy García (Ocean’s 11), Julianna Margulies (The Good Wife) and Emily Mortimer (Shutter Island), the film is set on City Island, a quaint fishing community on the outskirts of New York City. Here we meet the Rizzos, a dysfunctional family whose members all have secrets to hide and lies to tell.  Anchor Bay Home Entertainment released City Island on DVD in the UK on the 28th March 2011.

Andy Garcia is Vince Rizzo, a man who is so afraid to share his hidden aspirations with his wife that, when he goes to his weekly acting class in Manhattan, he pretends he is playing poker instead. Vince is also a prison guard, which is how he comes to find his illegitimate ex-con son Tony (Steven Strait) behind bars at the beginning of the film. Of course, Vince can’t drop that bombshell anytime soon on his family or his son, so instead he takes him home under false pretences and makes him help with some building work whilst living with them.

Meanwhile, Vince’s wife Joyce (Julianna Margulies) thinks he is having an affair, setting her sights on Tony to rekindle her sex life. Could this misunderstanding get any worse? Yes! Vince’s drama coach Michael Malakov (Alan Arkin, Little Miss Sunshine) wants all of his students to reveal their “biggest secret”. This assignment soon sets in motion a chain of events that will eventually reveal all of the Rizzos’ secrets and push them to the limit as they see each other clearly for the first time in years.

The premise of this small indie film is a  strong one: it isn’t the secrets that are important (the trailer/DVD blub reveals them immediately) but instead the interactions between the characters as they at first try to keep these secrets, and then finally come clean and reveal them. Emily Mortimer is wonderful in a key supporting role as Vince’s acting partner Molly, acting as a sort of guardian angel to Vince as she suddenly appears in his life, helps to mend things – both professionally and at home – and then… well, that would be spoiling things! Suffice to say, she is a lovely character and her interactions with Vince provide some of the most heartfelt and touching moments of the film.

What makes this such an enjoyable watch is the fine balance of drama and comedy. The secrets of Vince’s kids are hilarious in and of themselves, although a subplot dealing with Vince’s son having a fetish where he likes to feed fat people felt like it went a little too far at times. Luckily, there are enough great laugh-out-loud situations to counteract any moments that don’t quite work: Vince auditioning for a Marty Scorsese film, initially with a bad Marlon Brando impersonation and then with some true life inspired improvisation, is priceless. Trust me, the journey is worthwhile: when the shit hits the fan at the end of City Island (pardon my French), the drama and comedy elements fuse to perfection. You won’t know whether to laugh or cry…

Not everything is perfect. Some of the comedy elements could have been stronger and as previously mentioned, certain subplots felt a little out of place. Regardless, it is easy to see why City Island won the Audience Award at the 2009 Tribeca Film Festival: this is a real crowd-pleaser. It may retread old ground (a dysfunctional American family) yet it somehow manages to feel fresh and genuine all the same. A fun film that is easy to watch and even easier to recommend.