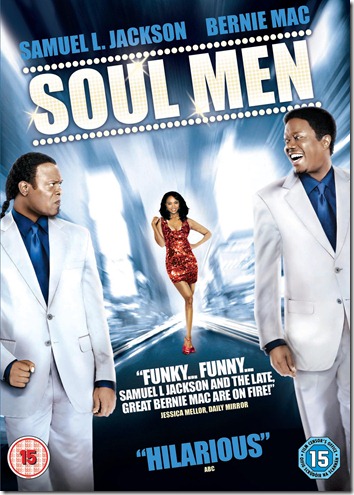 Soul Men is a 2008 American comedy film directed by Malcolm D. Lee, starring Samuel L. Jackson and Bernie Mac. Louis (Jackson) and Floyd (Mac) play two former backup soul singers who have not spoken to each other in over 20 years. When their former band member and lead singer Marcus Hooks (John Legend) dies, the pair reluctantly agree to travel across the country together to attend a reunion concert in honour of his death. Soul Men was recently released on DVD and Blu-ray in the UK.

The buddy-comedy road movie has been done to death over the years, and Soul Men doesn’t mess much with the tried-and-tested formula. Floyd actually wants to make a comeback. He has done reasonably well for himself, but more than the money, he misses performing. Louis blew all his money, doesn’t give a crap and has criminal tendencies. Both men start off at each others throats, before becoming friends once again. It is admittedly predictable, as is the classic car they drive on their road trip and the woman in the past one stole from the other. Luckily, the chemistry between Samuel L. Jackson and Bernie Mac is hilarious throughout and rarely falters.

As a result, there are many funny moments that hit their mark. Louis living in a rundown apartment with “a pantry full of dog food, and no dog” offers some strong laughs. Elsewhere, Floyd’s incompetence with a gun leads nicely into a scene where the duo start practicing their old dance routine at the side of the road to the sound of the car radio. Perhaps most importantly, the singing from both actors is strong. One wonderful scene involves the soul singers performing at a rodeo-style bar, with cowboy hat-wearing violinists joining in as backing musicians. At one point, Louis even jumps off the stage to join in with some line dancing.

Sadly, the script isn’t strong enough, or perhaps strong-willed enough, to resist including lowbrow comedy, as well as generic, unbelievable plot points. Wannabe rapper Lester (Affion Crockett) is nothing more than an exaggerated stereotype, his delivery more akin to a sketch show short than a feature length film. Elsewhere, Cleo (Sharon Leal) looks far too perfect to convincingly portray a woman in an abusive relationship, included more as eye-candy and an extra singing voice than as a genuine plot point. It comes as no surprise then that ‘Stiffler’s mom’ (Jennifer Coolidge) makes an appearance also, offering gross-out laughs in a film that could have been so much more.

Still, Soul Men ends up working pretty well in the end. The soundtrack is catchy, the visuals are sharp and Samuel L. Jackson and Bernie Mac have some strong chemistry together. There is even a fun cameo by the legendary Isaac Hayes, who sadly died, as did Bernie Mac, in August 2008, a mere day apart. The film was apparently heavily edited as a result to soften its tone, as a tribute to these two late stars. I cannot help but wonder if the original film would have had more soul than what we ended up with here. However, although Soul Men suffers in the end due to a weak script and split-personality disorder – it is genuinely funny one minute, overly juvenile the next – the end result is still fun enough to warrant an hour and a half of your time if you don’t want to watch anything too heavy. Oh, and the music is pretty awesome too.

AMO’s review copy of Soul Men was provided on Blu-ray by Organic Marketing.

Special Features include: Deleted Scenes, Director and Cast Interviews, A Tribute To Isaac Hayes, A Tribute To Bernie Mac, Behind The Scenes and more! (All in standard definition.)

Soul Men is available now on DVD and Blu-ray.