127 Hours directed by Danny Boyle tells the extraordinary true-life story of Aran Ralston, a mountain climber who became trapped by a boulder in Robbers Roost, Utah, for more more than five days in 2003. James Franco stars as Aran in a performance that can only be described as a force of nature.

The problem with a film such as 127 Hours it that the premise is already known to 99% of the audience before they even take their seats. I already knew well in advance that Aran ended up cutting off his lower-arm to make his brave escape back in 2003. For this reason, I was somewhat doubtful about the film adaptation: we already know what happened, and therefore what is going to happen. How much more is there to add?

Plenty. Director Danny Boyle introduces so much more into the mix that, surprisingly, a film about someone cutting their arm off remains endearing right up until the inevitable gore scene… and then far beyond. One question many people ask when something bad happens to someone like Aran Ralston is “Why do they do it in the first place?” Thankfully, that question never once crops up here: exploration and adventure are who Aran is. Even in such dire circumstances, the surroundings are absolutely beautiful. You can’t really blame the guy for becoming addicted. 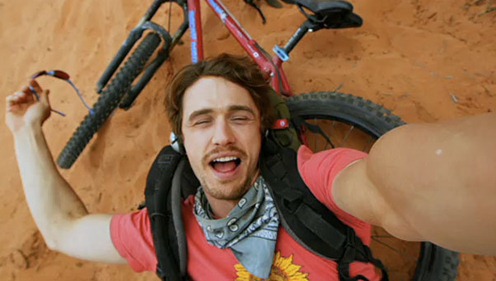 The use of split screen throughout is inspired. A technique that has become clichéd and stale over the years (I’m looking at you 24) is given a fresh lease of life from the very first shot. As Aran gets ready to head out, we are already firmly tapped into his adrenaline-fuelled lifestyle. This is somebody who never stops moving, who never accepts anything less than full sensory overload. It is amazing that both James Franco and Danny Boyle manage to so powerfully convey the sheer sense of euphoria Aran gets out in the open wilderness – whether on his bike alone, or moonlighting as a guide for two hot girls – to an audience who will be largely unacquainted with such daredevil antics. It’s addictive to watch.

It is very telling that the film’s title doesn’t show up on screen until Aran is well and truly trapped. He looks at his arm, and the boulder pinning it, in disbelief. We are quickly reminded why we are here in the first place and it is like a slap in the face. At one point Aran, half hallucinating, quips how his whole life has been leading up to this very moment, to this very boulder. It isn’t exactly hard to believe. The film’s premise has arrived, allowing the tone to plummet to the lowest depths of depression and despair… yet it never does. James Franco is extraordinary as Aran, likeable despite his faults, his sense of humour never leaving him. His performance is incredible.  In 127 Hours, there are just as many laughs as there are gasps. 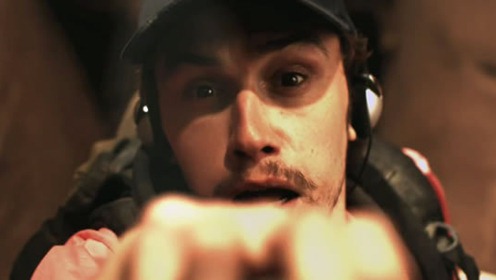 Yes it’s true, the arm cutting scene is not for the squeamish. Yet as unforgettable as that scene is, it thankfully doesn’t manage to overshadow the rest of the film. Some of the most memorable moments include Aran’s farewells to his family via digital camera, his gradually diminishing water supply and his vivid memories and hallucinations. Every morning, he extends his bare foot to get some sunlight. Bill Withers’ Lovely Day accompanies an early escape attempt involving a series of makeshift pulleys. It is a perfect marriage of visuals and sound, the camera suddenly pulling up and then out across the landscape, towards Aran’s van, towards escape and a bottle of drink. I can’t remember the last time I felt so involved with a film protagonist’s struggle.

The only faults to be found are within the aforementioned hallucinatory sequences. Whilst nowhere near as jarring as Leonardo DiCaprio’s videogame-inspired jungle freak-out during The Beach (also directed by Danny Boyle), some of the more extreme semi-lucid moments shown during 127 Hours can pull the viewer slightly away from the immediacy of the situation. However, it is all a means to an end – we even get to see Scooby-Doo in a live-action movie that doesn’t suck for once. Viewers who can get past the occasional bizarre moment and that horrific scene will be rewarded with one of the best films of the past decade. The soundtrack, vistas and Franco’s central performance are all truly awe-inspiring. An inspirational, unforgettable movie experience.