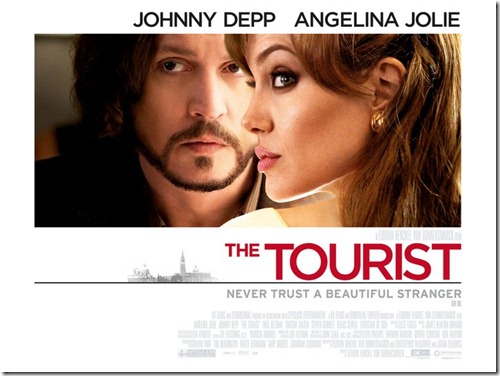 The Tourist is a comedic thriller directed by German film director Florian Henckel von Donnersmarck (The Lives of Others), starring Johnny Depp (Pirates Of The Carribean), Angelina Jolie (Tomb Raider) and Paul Bettany (The Da Vinci Code). It is a remake of the 2005 French film Anthony Zimmer.

The basic plot of The Tourist seems deceptively simple at first but soon manages to twist and turn into something far more complex and involving without ever becoming too obtuse. As the film begins, Elise (Angelina Jolie) is being watched in Paris by Scotland Yard police, led by Inspector John Acheson (Paul Bettany), who is convinced she is still in contact with her former lover Alexander Pearce. Pearce is wanted for tax evasion after embezzling over $2 billion dollars from a gangster who is now actively trying to hunt him down.

A plan is hatched and Elise boards a train to Venice. To fool the police that she is being reunited with Pearce, she chooses a man of similar height and build to sit with during the journey. This man is Frank Tupelo, played with a surprising degree of normalcy by Johnny Depp. The plan works to a degree, but the unlikely pair soon form a bond that complicates matters more than Elise could have ever imagined.

Venice is presented just as gorgeous and charming here as it was foreboding and ominous in Don’t Look Now (directed by Nicolas Roeg, 1973). The Tourist is a film that in many ways feels like a modern day Cary Grant cinematic escapade in the mould of such classics as North By Northwest (directed by Alfred Hitchcock, 1959) and Charade (directed by Stanley Donen, 1963). Many readers may scoff at such claims, but Hitchcock himself knew full well that any niggling plot holes could often be brushed under the carpet if there was enough adventure, charm and beauty on screen.

Which is why the casting here is so apt. Jolie is at the forefront of the production in her sexiest role since she became Lara Croft in the Tomb Raider films. Whereas most recently in Salt (directed by Phillip Noyce, 2010) she still had the toughness of a female action hero, she sadly lacked the class and feminism of her days as Miss Croft. Not so here. Channelling Audrey Hepburn and swanning around like she is taking part in an upmarket perfume advert, Jolie sizzles with sexiness and class as she saunters from scene to scene, a different outfit for each.

Contrasting with her beautifully, Johnny Depp as Frank manages to shed the memory of his notoriously quirky character portrayals over the past few years (Jack Sparrow, The Mad Hatter) to play a math teacher who was simply in the wrong place at the right time. Whether puffing on an electronic cigarette or running across the rooftops of Venice in his pyjamas, Depp manages to remain a worthwhile hero even if he does spend the majority of the film fleeing from his pursuers. Elsewhere, his dialogue with Jolie is pared-back and gently humorous throughout, making the conversations just as much fun as the action sequences. Speaking of which, neither Depp nor Jolie handle a gun once and the narrative is all the better for it.

Many of the criticisms that have been levelled at The Tourist seem rather petty and tired in the end. The plot may be a tad silly but then again the film never tries to present itself as a serious drama. Likewise, many of the oddities brought up by various character’s actions and motives are eventually explained via the final twists near the end, all of which sit very well and don’t come off feeling cheap in the slightest. It seems that many viewers and reviewers are so precious about films nowadays that they have simply forgotten how sometimes all cinemagoers need to have a good time is a little escapism and fun.

The Tourist has been in cinemas for nearly a month now and has been met with mostly negative reviews from critics. Which just goes to show why you shouldn’t always blindly trust what the critics tell you. Of course, a review is only an opinion. Still, in my humble opinion The Tourist is a surprisingly enjoyable watch that doesn’t try to be anything more than it is. Fuelled by two strong central performances and complemented by an able supporting cast, this film is good old-fashioned fun that never takes itself too seriously, and as a result deserves to be judged on its own merits.

One response to “FILM REVIEW – The Tourist”