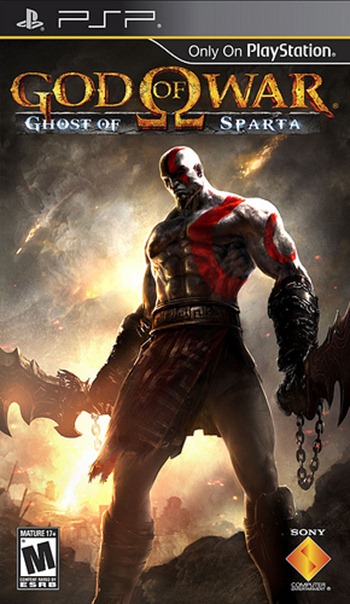 Ghost Of Sparta is the sixth instalment in the critically lauded God Of War series and the third chapter chronologically. It is also the second God Of War game to appear on PSP, again created by Ready At Dawn but this time in collaboration with the SCE Santa Monica Studio, who of course created the stunning God Of War III on PlayStation 3 earlier this year.

The storyline for this new chapter in the God Of War saga is an intriguing one. Serving as an early origin tale for Kratos (some scenes in flashback offer glimpses of his childhood), here he must journey to the city of Atlantis before venturing deep into the Domain of Death, searching for his long lost brother Deimos.

Controls remain pretty similar to what fans of the franchise will be familiar with, but there are a few changes. Kratos can now run at enemies and throw them to the ground for a pummelling, and the new Thera’s bane ability (activated by holding down the R button) covers the Blades of Athena (back from God Of War II) in fire, increasing their damage and allowing Kratos to break through certain walls and the armour of his enemies.

The new magical abilities are well thought out too and I actually found myself using them a lot more than I had done in the previous games. The Eye of Atlantis for example starts off as a basic electrical attack, but once upgraded becomes deadly. Tapping the Circle button sends out powerful bursts of electricity that shoots enemies backwards before jumping to other nearby foes.

As usual, I had mixed feelings about the obligatory optional weapon, here named the Arms of Sparta and taking the form of a spear and shield. Although the use of a projectile weapon was occasionally useful, the combat suffered most during its use and I almost always found myself sticking exclusively to the Blades of Athena. When your basic tools are so responsive and powerful, it becomes difficult to switch to another weapon.

Sticking with your trusty blades, the core combat remains as fun as ever: the PSP seems made for this series. The fixed camera angles compliment the lack of duel analogue sticks perfectly and on a technical level, Ghost Of Sparta surpasses Ready At Dawn’s previous effort Chains Of Olympus with relative ease. There are more enemies on screen, the graphics rival the very best PS2 games ever made and the experience is of a decent length. Save points are generous too, spaced at approximately 10 minute intervals, with checkpoints along the way.

It is strange, because although this is a repetitive series with basic puzzles and a focus on combat, Ghost Of Sparta still feels relatively fresh. We shouldn’t kid ourselves though: the series would be nothing without Kratos as the definitive gaming antihero, and the world itself being so rich with Greek mythology and exploration. It is hugely enjoyable to watch Kratos actually look sad and mournful for once as he searches for his brother, displaying genuine emotion. His story is nothing short of epic… but God Of War III undoubtedly spoilt us. That game cast a huge shadow, but it must be remembered that, for a PSP game, Ghost Of Sparta casts a pretty big shadow too.

Sure, there is the occasional bug where I fell through the floor and died. As well, the combat – although still satisfying – doesn’t reinvent the wheel and some of the new abilities introduced made the game feel slightly easier than it should have been. Yet this is powerhouse entertainment on a sadly underutilised platform. Technologically, this may be the PSP’s finest hour. Prequels and spin offs can be terrible if done badly (just look at the Star Wars franchise) yet Ghost Of Sparta succeeds because it fits in with the established storyline so well. A superb PSP game and a worthy addition to a franchise synonymous with quality gaming.