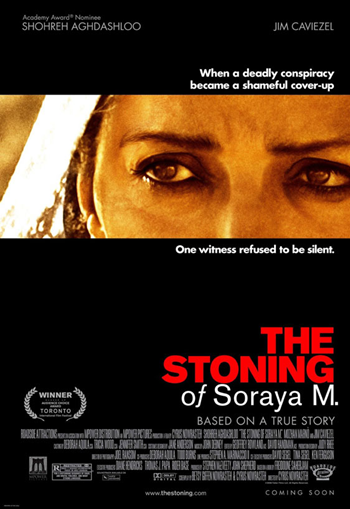 The Stoning Of Soraya M. is a harrowing drama adapted from French-Iranian journalist Freidoune Sahebjam’s 1990 book of the same name, directed by Cyrus Nowrasteh. Based on a shocking true story, American actor James Caviezel (The Passion Of The Christ, Déjà Vu) portrays journalist Sahebjam himself, caught up in the aftermath of a conspiracy that eventually led to the brutal stoning of an innocent woman, Soraya Manutchehri, the day before his arrival. As the cover-up slowly begins to unravel, Soraya’s aunt Zahra tells Sahebjam – and his tape recorder – everything, even as the conspirators close in…

This a masterfully shot film from the outset, with the opening sequence of Zahra (Shohreh Aghdashloo) walking through her remote Iranian home mixing beautifully with Sahebjam arriving in his struggling car. There is a heavy sense of fate and destiny in these initial moments as the sun begins to illuminate the landscape. Zahra, an obvious outsider in her own village, needs to tell the truth of her neighbours to somebody who can make a difference. Sahebjam, waiting in the village for his car to be repaired, is that man.

James Caviezel is a wonderful actor and he adds weight to a somewhat limited role here. The film paints him as its protagonist, yet that duty falls squarely on Shohreh Aghdashloo’s shoulders. As Zahra, the entire middle section of the film is shown in flashback, not so much from her perspective, but from her recollections nonetheless. There is no voiceover, but we are made aware that the tale is being recorded by Sahebjam as he meets with Zahra in private. The moments before this meeting are fraught with tension, the looks of intense distrust from the locals impossible to miss. To suddenly jump back in time adds to the sense of dread: what exactly happened here?

The title of the film of course gives the answer away immediately: Zahra’s niece, Soraya, was stoned to death. But why? The truth is as horrifying as the act itself, events set in motion by a husband who doesn’t want to pay for divorce, or support two families at once when he eventually marries the 14 year old girl he is bedding. Sharia Law is shown to be terrifyingly skewed in favour of men. It is amazing how a mere malicious rumour of adultery, intentionally spread, can pick up enough force to end the life of a young mother, all in the name of “God’s law” and “God’s will”, whilst her husband sleeps freely with whomever he pleases.

The stoning itself is shown tastefully, yet will be difficult to watch for many viewers. The impacts of the stones are unflinchingly shown, yet more painful to witness are the people throwing them, brainwashed into thinking this is the work of God. A horrific act such as this deserves to be shown accurately, and I can therefore not criticise this aspect of the film even though it greatly disturbed me. This is powerful filmmaking with a firm message: such acts of violence can never be God’s work. Mozhan Marnò (who plays Soraya M.) is to be commended for filming such difficult scenes.

The impact of the stoning sequence is undoubtedly strengthened by the dark sense of foreboding that resides throughout the entire story. Zahra knows that something bad is going to happen, yet Soraya is blind to the danger she is in. There are plenty of moments that linger: the kindness Soraya shows to a recently widowed man, Zahra dancing and laughing with her soon to be dead niece, the unbearable clicking together of stones by the local children as they wait to join in with what can only be described as a societal murder. Soraya’s own father casts the first stone.

Yet with an ending that is both exhilarating and uplifting, The Stoning Of Soraya M. is definitely worth a watch, despite a subject matter that travels to the darkest depths of humanity. The small glimmer of light at the end offers some much needed hope, with the final moments some of best I have seen in recent times. My only issues with the film are ones of personal taste: I would have liked the film to show Sahebjam’s reactions throughout, rather than simply using his story to bookend Zahra’s. After all, this is as much his tale as it is hers. Hard to watch and difficult to swallow, this is a film that pushes boundaries that regrettably still need to be pushed.

The Stoning Of Soraya M. was released in UK cinemas on 22nd October 2010.