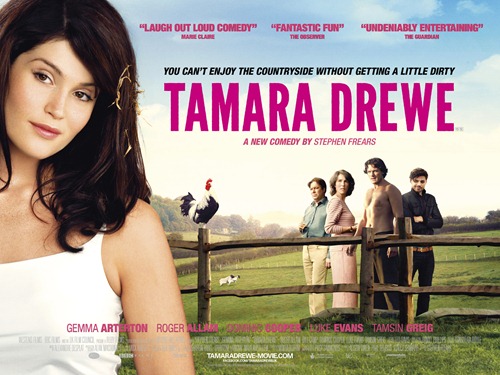 Tamara Drewe, based on Posy Simmonds’ Guardian comic strip and graphic novel of the same name, is the latest in what looks to be an interminable line of films making the jump from glossy page to screen. It’s not your usual adaptation though: this one may as well have been called “A Romp in the Country”. With a plot loosely derived from Thomas Hardy’s Far From The Madding Crowd, Stephen Frears’ (High Fidelity, The Queen) latest offering is a bourgeois bonkfest.

The eponymous Drewe (Arterton) is a successful journalist, who returns home to sort out the family’s affairs following her mother’s death. Before she left the family’s Dorset pile, Drewe was a snooty girl with a big conk. On her return, post-rhinoplasty, she is a career-driven sexpot with a penchant for short shorts and shagging. The local men are, quite understandably, enchanted. 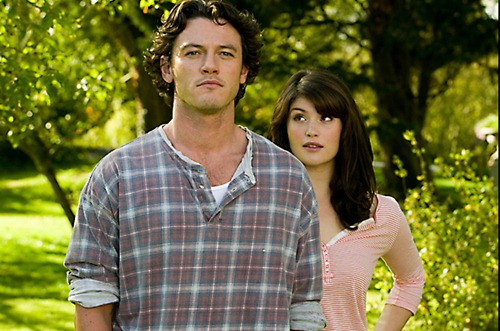 First, there’s wholesome farmhand Andy Cobb (Evans) with whom Drewe had a teenage fling. You just know he is so right for her. Then there’s Ben Sergeant (Cooper), a cocky rock star with an off-the-peg personality and an unruly dog. Finally, there’s local author, dirty old man and adulterer-extraordinaire Nicholas Hardiment (Allam), whose long-suffering wife (Greig) runs a writers’ retreat in a neighbouring cottage.

Drewe finds herself at the hub of the local scandals and, with the inadvertent help of two mischievous schoolgirls in thrall of her rock star boyfriend, Drewe’s presence turns the sleepy village on its head with comic and ultimately tragic results.

It’s difficult to know whether or not you’re supposed to like Drewe. Despite her Mini Cooper middle-class lifestyle, she comes across as a bit of a self-absorbed navel-gazer, alluding to her “difficult” upbringing in her autobiographical newspaper column. Drewe achieves this without a hint of irony: she had an absentee father, but was raised in a privileged, horsey rural paradise seemingly without want.

Feminists praise “empowered” women like her: they’re focused, career-driven, sexually liberated. More conservative types might conclude that she’s a manipulative strumpet ruthlessly pursuing her own interests without thought or feeling. Perhaps that’s an issue for you. Yet there’s no denying that Arterton gives a good performance, justifying her rising star in the British film industry.

Kudos is due also to Tamsin Greig who plays Beth Hardiment. Mrs Hardiment occupies the opposite pole to Drewe: disempowered, sexless, and at her sleazy husband’s beck-and-call. Greig’s performance is understated but carries tremendous emotional clout, leaving the viewer to sympathise immensely with her plight.

Tamara Drewe at times resembles soporific BBC Sunday night fare in the “so-and-so’s rogering the fishwife” vein. Describing the film as a romantic comedy rather stretches the definition of that genre to breaking point. If you’re looking for roll-in-the-aisles, laugh-a-minute, “ooo, er, missus” hilarity, this picture isn’t for you.

It’s all a bit safe: Frears neither breaks new ground nor shifts any paradigms with this latest output. This reviewer couldn’t escape the feeling that he’d seen it all before. But it’s entertaining enough and the director deserves praise for keeping things simple, making a film that relies on a good story rather than empty stylistic trappings.

In this way, Tamara Drewe differs from its cousins in the graphic novel family, which often depend on visuals and effects to make up for deficiencies in the plot. Tamara Drewe trades on solidity and subtlety, making it a ray of sunlight following an overcast summer at the box office.