With Avatar having finally been released just under two weeks ago, Alternative Magazine Online decided we needed to give our readers the full lowdown on this cinematic milestone… 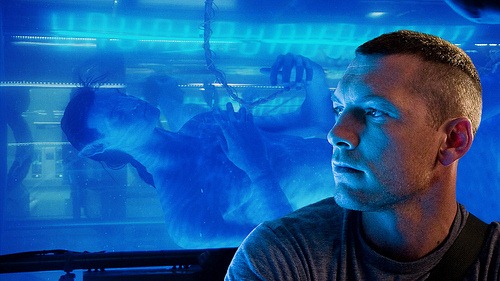 In development since 1994, I almost felt sorry for Avatar in the weeks leading up to its release. The weight of the anticipation upon its shoulders must have been immense. James Cameron, the director of Terminator and Aliens, returning to sci-fi in glorious, pioneering (Reality Camera System) 3D. In development since 1994, Cameron even went on record in 1999, stating that “technology needed to catch up” before he could get his vision on screen.

December 2009… his vision is here. I knew I had to see the film in 3D (2D wasn’t even a viable option in my mind), so I travelled to a further venue than my usual local cinema, which has not yet upgraded to the new tech. I have seen 3D several times before (my first press pass for a film was to see Bolt 3D) so I knew what to expect. Yet here, it really hits home. Hard.

An early scene shows marine grunt Jake Sully (Sam Worthington) awakening from a cryogenic sleep on his was to the planet of Pandora, disabled from the waist down, yet floating easily in zero gravity amidst his fellow awakening marines. The 3D here is splendid, giving a great depth of field that feels tangible and real. As the film goes on, your mileage will vary. I soon forgot the glasses were even on my face, although my girlfriend’s eyes eventually started watering. How much 3D adds to the film is debateable… I will be curious to see it again on Blu-ray.

The sets for the marine base/ships are fantastic. It makes me salivate to think what Mr Cameron could achieve if he ignored Alien 3 and 4 and did his own sequel to Aliens with everything he has learnt in the intervening years. His visions of the future feel realistic and weighty, which is what science fiction cinema should always aim for. The fiction feeling factual is a constant delight.

Likewise, once we finally get deep into the heart of the Pandoran jungle, the CG effects and 3D wizardry combine to convey something quite breathtaking. On a purely visual scale, Avatar is a 10 out of 10, no question.

Sure, there are hiccups. Throw a real live actor into the jungle and the seams are slightly more apparent. We skirt around the uncanny valley a few times, yet the alien species of Na’vi are quite simply the most realistic computer generated characters yet seen in any medium. 95% of the time, this all feels so real.

But perhaps I am getting ahead of myself. The story revolves around marine Jake Sully, chosen after his brother’s death to enter the Avatar programme. Here, he will enter the body of a specially created Avatar, designed with a mixture of human and alien (Na’vi, the humanoid species of the planet they are on) DNA. This will not only allow him to breath the toxic air of Pandora, but also integrate with the Na’vi species.

Of course, there is a sinister reasoning behind all of this. Much in the vein of Aliens (the fingerprints of this sci-fi masterpiece are present everywhere, from the futuristic Marines to the Amplified Mobility Platform suits) there is (of course) a shadowy company who only see dollar signs and don’t care about the expendable cost, whether that amounts to human or alien lives as payment.

Giovanni Ribisi as Parker Selfridge, the front man for the company on this expedition, is fantastic. Remember Paul Reiser as Carter J. Burke in Aliens? Ribisi may be an even better company man than he was. He is so good, that when we get the typical low down shot of him hitting golf balls in his office… it feels new and authentic. A great slimeball.

Sigourney Weaver as Dr. Grace Augustine is brilliant as well, apparently basing her character on Mr Cameron himself. Bossy, egotistical but essentially good-natured and kind-hearted, it was really great to see her back on form after all these years.

Sam Worthington has had a great year as a leading man. From playing the new humanoid form of the Terminator (Terminator Salvation), to the titular Avatar, and next year becoming Perseus in the remake of Clash  Of The Titans… Sam is a wanted leading man nowadays for a reason.

He has the acting chops to match the more basic action capabilities required. To top all of this, he seems a genuinely down to earth, nice guy. His personality, movements and facial ticks transfer beautifully to his Avatar form. I would even go as far as to say that, without his performance, the film would have been a much harder sell to audiences. He portrays the joy and delirium of walking for the first time in years so naturally that I never doubted it for a second. 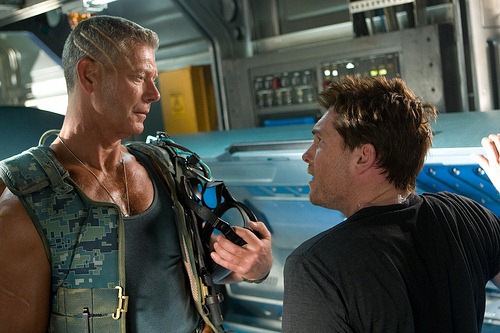 Stephen Lang as Colonel Miles Quaritch is a major highlight. Apparently he auditioned for Aliens all those years ago and didn’t make the cut. James Cameron remembered this and cast him here. It was a masterstroke: Lang chews the scenery with reckless abandon, charismatic and  pig-headed all at once. He is the ultimate badass, alien scars running down one side of his face, holding his breath without a mask in the toxic environment several times to burst off rounds of gun fire. As the main antagonist, he rocks.

The rest of the cast is rounded off nicely with some familiar faces, perhaps the most well know being marine fighter pilot Michelle Rodriguez (who feels sadly quite underused), as well as Na’vi aliens Zoe Saldaña (Pirates of the Caribbean: The Curse of the Black Pearl) and C. C. H. Pounder (The Shield).

So far, so good… yet the film does stumble. At 2 hours and 40 minutes it never really drags (thankfully) yet it does feel underdeveloped plot-wise, with the script often taking a back seat to the fantastic visuals. For some film fans (especially fans of epic sci-fi and fantasy hybrids), Avatar could well be heaven.

For me though, I prefer more meat to my narrative. Strip away the visuals, and Avatar is still a surprisingly familiar story. Guy has a job to do, but gets too involved, falls in love with the girl (Doc Hollywood in space maybe?) and ends up saving the day. Sure, it looks amazing along the way, but please, lets not pretend it is the best film ever made… this isn’t Shakespeare folks, this is money (a lot of money) giving us the shiniest spectacle ever committed to the silver screen, pure and simple.

There are moments that resonated with me, certainly. When the planet starts to get destroyed by the unfolding events, I winced a little. The environment feels so stunning and real that it is horrible to see it be treated with such disrespect, trees crunched down by cold, destructive machines. It may be slightly heavy-handed, but it is still hard not to draw parallels with the way we ourselves (as a race) are constantly abusing and raping planet earth. For shame.

Also, the last 30 minutes have some amazing battles in the sky and on land (avoiding spoilers) that have proven once again that James Cameron can still take the young-gun action directors to school and teach them a thing or two in the process. The faceoff between Jake and the Colonel at the end is quite frankly insane. Arriving on Pandora evokes that amazing feeling you felt when the helicopter first landed on Isla Nublar in Jurassic Park… a beautiful, dangerous adventure is about to begin.

But sadly the story never seemed able to get me involved enough with the characters themselves (personally, I felt pretty detached) and some parts, such as the hippy tree-hugging Na’vi spiritual group chanting and dancing, made me want to throw up. I wanted to feel so drawn in… yet it never happened. I was more taken with the planet itself than the people running around upon it.

“I can’t imagine me aged 15 or 16 not loving the movie, watching it and not being satisfied.” James Cameron (Empire Magazine UK, January 2010).

But I will say this: James Cameron said something recently along the lines of this being the film his younger self would love. I couldn’t agree more… I find it hard to imagine anybody that age not being blown away. Heck, two young boys in front of me seemed so excited after the credits rolled, I couldn’t help but smile. Avatar, from its carefully planned out wildlife chain, to its fully formed new alien language, is a true labour of love that taps into the young mentality of losing yourself in a film, and hones it to perfection.

Better than Aliens or Terminator though? For this viewer/reviewer, no way. Without the effects, this film would have been a solid 7 at best. Yet with all the  razzmatazz and CGI wizardry (especially in 3D), it ushers in a new era of cinematic achievement, like it or not. I just hope next time (two sequels are already planned) that the story can keep up. To finish (both the film and this review), the ending shot, although pretty goddamn predictable… is pure f*cking coolness, plain and simple. (Just don’t stick around for the god-awful Leona Lewis  track at the end… what were they thinking?!) Recommended, overhyped… still ricocheting around in my head.