INTERVIEW – In Conversation With Andrew Cartmel (Author, The Vinyl Detective)

Following on from our recent reviews of Written In Dead Wax (“charming, funny and engaging”) and The Run-Out Groove (“a follow-up every bit the equal of its highly memorable predecessor”), Alternative Magazine Online is proud to present an exclusive online interview with the talented cat lover behind The Vinyl Detective, author Andrew Cartmel!

Hi Andrew, thank you for your time and welcome to Alternative Magazine Online!

I used to script edit Doctor Who in the Sylvester McCoy era (‘The Cartmel Masterplan’). These days I am writing crime novels, comics (including Rivers of London in collaboration with Ben Aaronovitch) and, most recently, a stage play.

When did you first decide that you wanted to become a writer?

Very early. As soon as I learned to read.

You’ve written for TV shows such as Doctor Who, Midsomer Murders and Torchwood – quite an enviable CV for any writer! Do you have a favourite TV show that you’ve worked on?

I have to correct you there. I script edited Doctor Who (which means I led the writing team) but I never wrote an episode myself. And though I wrote scripts for Midsomer and Torchwood, and I was paid for them (very handsomely in the case of Midsomer), the episodes were never made. So in some ways my favourite TV show of those I worked on was Dark Knight, for which I did write some episodes that were made, and were broadcast.

You’ve also written several novels and comic books and even performed stand-up comedy! Regardless of the medium, would you say your writing has any recognisable hallmarks?

These are more easily spotted by other people. However I am aware that I do like to blend drama and comedy, so certainly that’s a hallmark — and hopefully it’s a fairly wry, ironic and absurdist kind of humour that I employ. But there we are talking about form. I suppose the most notable characteristic which I have been made aware of is in the content of my writing, and that is my enduring concern about animals — my love for them and my anger at their mistreatment. This often features in my work without me being particularly aware of it.

My father is a huge fan of Rivers of London! Have you enjoyed working on the graphic novels with Ben Aaronovitch? When is the next one due for release?

Say hi to your dad! He is a man of taste and we are proud to hear that. The third Rivers of London graphic novel (Black Mould) has just been printed. The fourth comic mini-series (‘Detective Stories’) is halfway through its appearance as monthly issues (‘singles’ in the jargon) and once that has been completed, it too will appear as a graphic novel. 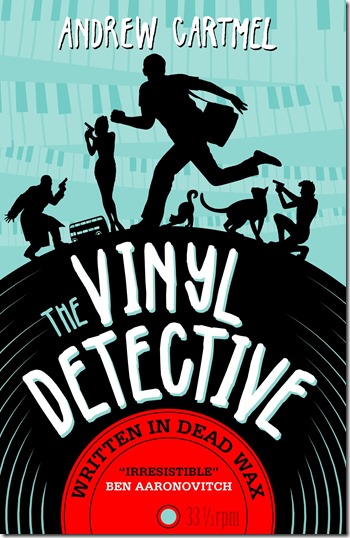 In 2016 you released the debut novel of a new series: The Vinyl Detective. I greatly enjoyed both Written In Dead Wax and The Run-Out Groove, as I’m sure you could tell from my recent reviews! Where did the idea for this new series come from?

Thank you. You’ve mentioned Rivers of London, the bestselling series of novels by my friend Ben Aaronovitch. It was Ben who advised me that if I wanted to succeed as a novelist I should write about what I really love. And I have a passion for searching out and listening to music on vinyl. I combined that with my love of crime novels, and the Vinyl Detective was born.

It was only when I came to write my review of the first book that I realised the protagonist’s real name is never revealed! Was this a conscious decision, or just something that happened organically as part of the writing process?

Very perceptive of you to mention the ‘organic’ possibility, because that is exactly what happened. Because it is a first person narrative, told from our hero’s point of view, the lack of a name for him didn’t immediately become obvious. And when I realised I hadn’t given him a name, I quite liked it and began to run with it. I imagine plenty of people can read one or more of my books and not even notice. I was the same way with Len Deighton’s novels The Ipcress File, Funeral in Berlin, Horse Under Water, etc… I was caught up in the story and simply never registered that the narrator was nameless.

What drives the main character?

For those who haven’t yet read either book, how would you describe the basic premise of the series?

They are refreshingly different from the current trend for Nordic noir, which is full of grisly killings and gloomy, tormented protagonists. My books are thrilling and suspenseful but also funny and engaging — we get to know the characters and care about them. They are a hybrid of some very different types of crime novels — the mystery, the thriller and the ‘cosy’.

I love how you mix dark drama with light comedy – is that a hard balance to strike?

It comes naturally to me. It’s just the way I think. It is also what I enjoy as a reader, and as a movie goer  — the contrast is very effective.

How much research was involved when writing the first two books?

Well, there’s a lot of research in them — I try and get all my facts right. But the essential material, about vinyl and record collecting, is something I obviously already know about because I’m a vinyl nut myself.

Is it safe to say you’re a connoisseur of LPs?

I’m looking happily at a rare British pressing of a classic jazz LP right this minute — Earthy by Kenny Burrell and the Prestige All Stars (Esquire 32-120). I love this stuff. And nothing sounds better.

So far you’ve covered 1950s American jazz and 1960s British rock – what can readers expect in book three and beyond?

Book 3 (Victory Disc) features swing music from the 1940s. In Book 4 I plan to write about psychedelic British folk.

Are any of the fictional characters from the books based on real people you’ve met or researched?

Sure. For Valerian, the singer in the second book, my starting point was imagining a British rocker like Syd Barrett, a major talent who tragically became a casualty of drugs and mental illness. But I’d stress that this was just a starting point… I was also thinking about Janis Joplin and Jim Morrison when I was creating that character.

LPs seem to be making a massive comeback – Sony has just announced that its going to start production again for the first time since 1989! Why do you think vinyl remains so popular to this day, despite the advent of CDs, MP3s and Spotify?

For a start, vinyl really does sound better than even the finest digital recording, if the vinyl is properly made and played on a good system (which admittedly can be a big ‘if’). It’s an analog format and there is no way digital music can ever be as good as an analog recording, simply because analog is the real thing. Digital will always, by its very nature, be a copy or an approximation. And it will always fall short. Also, simply as a physical artefact, LPs are so attractive — look at how beautiful the art can be on their huge covers. People sometimes buy records and don’t even play them. They just like to touch them, look at them, hang them on their wall (I’ve got quite a lot hanging on my own wall)… you don’t get that with a download.

Who’s your favourite music artist and why?

Well, Miles Davis and Duke Ellington come immediately to mind. Two towering jazz greats. Miles was the ultimate example of the small group leader. Duke was the same thing for the big band. But just at the moment I’m listening a lot to a sax player called Jackie McLean, and he’s stupendous… so he’s my current favourite. I will also hastily mention Art Pepper, Hank Mobley, Lee Morgan, Donald Byrd and Cannonball Adderley, all of whom are instrumentalists. My favourite male singer is Mark Murphy. My favourite female singer is Lucy Ann Polk. Sorry to give a long answer, but this is such wonderful music I wanted to spread the word.

What’s next for you Andrew?

As I mentioned, I’ve just written a stage play. Ideally for me the next thing would be to see that open in a nice theatre and win over audiences. Keep your fingers crossed.

Thank you for your time, I loved the first two Vinyl Detective books and I can’t wait to read and review Victory Disc next year!

Thank you. It’s been my pleasure.

One response to “INTERVIEW – In Conversation With Andrew Cartmel (Author, The Vinyl Detective)”