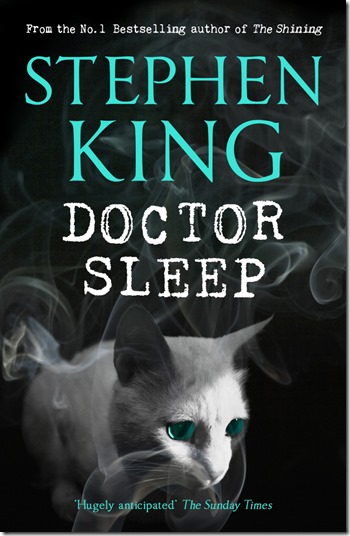 Doctor Sleep is the latest novel from award-winning author Stephen King. A sequel to his 1977 masterpiece The Shining (his third published book), Doctor Sleep explores the life of a now grown up Dan Torrance. Haunted by the horrific events that took place at the Overlook Hotel when he was just a child, Dan eventually settles down in rural New Hampshire and starts using his ‘shining’ power to comfort the dying. Aided by a mysterious cat with an uncanny ability to predict death, Dan comes to be known by the locals as ‘Doctor Sleep’…

He was eight now, and capable of at least some rational thought even in his horror. Partly because, in a deep part of his mind, he had been expecting this. Although he had always thought it would be Horace Derwent who would eventually show up. Or perhaps the bartender, the one his father called Lloyd. He supposed he should have known it would be Miss Massey, though, even before it finally happened. Because of all the undead things in the Overlook, she had been the worst.

Doctor Sleep opens in March 1981, three years after the events of The Shining. Following the ‘accident’ at the Overlook Hotel that caused the boiler to explode and Jack Torrance to be killed  (blamed officially on an inoperative steam valve) Wendy Torrance and her son Dan receive a modest settlement and try to move on with their lives. One night, Dan wakes up needing to pee and finds the dead woman from Room 217 in the bathroom. She was sitting naked on the toilet with her legs spread and her pallid thighs bulging. Her greenish breasts hung down like deflated balloons. The patch of hair below her stomach was gray. Her eyes were also gray, like steel mirrors. She saw him, and her lips stretched back in a grin.

After closing the door and watching the handle turn right… left… right again, Dan wakes his mother and tells her not to go into the bathroom because there is a bad thing there, before returning to his bed and refusing to say another word. The Overlook Hotel – and its evil inhabitants – aren’t done with Dan yet. The incident is unsettling enough for Wendy to contact Dick Halloran, the black chef with the ‘shining’ who saved their lives during the winter of 1977. A close friend of the family, Dick shares an unspoken bond with Dan and arrives with a powerful gift. Evil can never truly be destroyed – but it can be locked away…

Dan Torrance opened his eyes. Sunlight shot through them and into his aching head, threatening to set his brains on fire. The hangover to end all hangovers. His face was throbbing. His nostrils were clogged shut except for a tiny pinhole in the left one that allowed in a thread of air. Left one? No, it was the right. He could breathe through his mouth, but it was foul with the taste of whiskey and cigarettes. His stomach was a ball of lead, full of all the wrong things. Morning-after junkbelly, some old drinking buddy or other had called that woeful sensation.

Like father, like son. Before arriving at the present day where the main body of the story takes place, Doctor Sleep explores the life of Dan Torrance the alcoholic. What initially comes across as somewhat clichéd soon makes perfect sense – the ‘shining’ is dulled by booze and Dan is a man who wants to forget. He has a host of unspeakable horrors locked away inside his head. Who can blame him for wanting a drink? And another. And another. A drifter with nobody left in his life, Dan Torrance has hit rock bottom and there’s nowhere left to go. Nowhere, that is, until he arrives in Frazier, New Hampshire.

Cut to the present day, and Dan has nearly 15 years sobriety with a job in a local nursing home that allows him to use his powers for good, comforting the dying with the help of a cat that can predict the future called Azzie. He finally seems settled – but he will soon be drawn into the life of a young girl named Abra Stone, who has the brightest shining he has ever seen. Abra can play piano notes from old Beatles tunes with her mind, and stick spoons to the ceiling. She’s a bright, decent little girl. She’s also the big meal ticket for a group of immortal vampire-like creatures known as ‘The True Knot’, who drive along the highways of America in their RVs disguised as run-of-the-mill tourists, drinking the ‘steam’ of murdered young children who possess the shining.

Brad Trevor whispered, ‘Please kill me.’
Rose the Hat gave him a comforting smile. ‘Soon.’
But it wasn’t.
Those husky barks recommenced, and eventually they turned to steam.
At dawn, they buried the boy’s body. Then they moved on.

It would have been all too easy for Stephen King to craft a generic, perfunctory sequel to The Shining. He could have simply rebuilt the Overlook Hotel, with new horrors stalking its corridors. Instead, he unleashes unspeakable evil into the world at large and charges a once young and frightened boy with the difficult tasks of growing up, and protecting a child in need. A child in terrible danger, as he once was. Although not as terrifying as its predecessor, Doctor Sleep is ultimately a much more hopeful book, written by a man who has faced the evils of alcoholism first hand, and defeated them. There are certainly moments of horror – evil enough to make the skin crawl and the covers to rise beneath your chin as the wind howls outside – but they are tempered by a beating heart and roaring soul that make this a worthwhile sequel rather than a merely satisfactory one.

In short, Doctor Sleep rises to the occasion and Dan Torrance continues to shine. His story entwines with Abra Stone’s beautifully and their battle with The True Knot is nothing short of epic. The subtle and not-so-subtle references to The Shining will delight fans, but this is very much a story that can stand on its own two feet (whose mind will occupy the body attached to those feet is another matter entirely). There are moments where King can make his characters seem too willing to believe the madness unfolding all around them simply because it serves his narrative, and other times where the dialogue can sound a tiny bit forced – but these moments are few and far between. One of Stephen King’s greatest strengths is that he can make the seemingly ordinary terrifying – Breaking Bad made the RV iconic; here King makes it pure evil. A real page turner that is guaranteed to keep you up at night with its sharp writing and dark secrets, Doctor Sleep ends up feeling somewhat ironically titled.