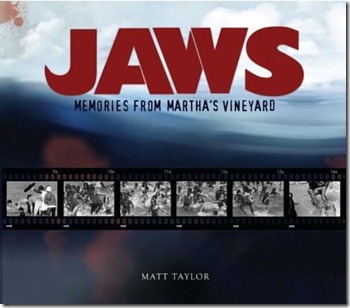 Jaws: Memories from Martha’s Vineyard tells the behind-the-scenes story of the blockbuster film that changed cinema – and the quaint New England island of Martha’s Vineyard – forever. Filmed on location in 1974, hundreds of locals were hired to work as actors and labourers, many of them armed with their cameras. Featuring the incredible photographs of these amateur and professional photographers – along with memories fondly recollected – this new, expanded edition published by Titan Books features 16 additional pages of never-before-seen material.

Undoubtedly, few islanders realized during the spring and summer of 1974  that they were witnessing the birth of a film that would reshape the calculus of Hollywood filmmaking, ushering in the era of the summer blockbuster and effects-laden spectacles. Nor could they have imagined that their unassuming island would serve as the backdrop for some of the most memorable and terrifying scenes in movie history, ones that would become woven into the fabric of popular culture and the memories of moviegoers for generations to come.

Matt Taylor is a fifteenth generation resident of Martha’s Vineyard – Jaws: Memories from Martha’s Vineyard is his first publication. As well as writing the book, he also compiled all of the photographs along with Jim Beller, the owner of the world’s largest collection of Jaws memorabilia (JAWScollector.com). The book is told in chronological order, from Production Designer Joe Alve’s fateful journey to Martha’s Vineyard in December 1973 (he was supposed to visit Nantucket but the ferry was turned around due to snow), to the explosive premiere of the film in June 1975.

Jaws is a film that ran severely over schedule and over budget. At the time Steven Spielberg was a relatively unknown director and the production saw numerous problems. Shooting on location caused many issues – the unpredictable weather, the untameable ocean and several malfunctioning sharks. Then there were the locals – some unimpressed by the production’s effect on their peaceful, quiet island, others clambering to be a part of a real life, genuine Hollywood movie.

Edith Blake: “Islanders really felt the full brunt of the production during the first few weeks. The conglomeration of Universal’s trucks and trailers parked around town was simply enormous. [The filmmakers] eventually spread out across the Island, but at first, they were shooting everything right in and around downtown Edgartown. They were blocking traffic, keeping people from their driveways and boats. It was utter chaos.”

As previously mentioned the photography throughout is incredible, with some particularly beautiful black-and-white images of scenes being shot and the actors/extras between takes. It’s testament to the hard work put into the fake sharks that, despite often being shown here with wires exposed and completely out of the water, they still manage to evoke a shudder of dread. It’s not only mind-blowing to realise the sheer scale of the production – and its complexity due to location shooting and the use of local extras – but also to imagine the weight upon its young director’s shoulders as the delays increased and the budget ran over.

Yet what makes Jaws: Memories from Martha’s Vineyard a truly exceptional book is that it tells its story through the eyes of the island’s locals. It must have been an incredibly exciting time to be a child living on the island in 1974, whether sneaking into a construction yard to steal a tooth from one of the model sharks, or pretending to cook hotdogs for a scene shot on a freezing cold beach. Each person featured has their own story to tell – the book’s text is mostly comprised of long quotes from the locals and filmmakers offering unprecedented insight into the film’s creative process. Many truly amazing people are quoted, but perhaps the most interesting and integral to the film being made is local seaman and marine mechanic Lynn C. Murphy. He even influenced Robert Shaw’s acting as Quint!

“We returned to the studio with our tails between out legs,” Gilmore recalls. “We thought we had failed. We had gone way over schedule, way over budget, and didn’t exactly come home to a rousing cheer. But despite that, we still had a picture to finish.”

Featuring beautiful and arresting photography, trivia galore and a treasure-trove of memories, Jaws: Memories from Martha’s Vineyard is quite simply one of the greatest behind-the-scenes film books ever written. It’s a gripping read from start to finish – you’ll pour over every single image, quote and newspaper clipping. By the end, you’ll feel like you where there every step of the way, as the filmmakers battled to make a great film and against the odds, won. Jaws should have been a disaster – instead it became a classic film that made an entire generation afraid to go into the water. Such a much-loved film deserves a coffee table book such as this: jaw-dropping.