FOOTPRINTS is a creator-owned comic book mini-series written by Joey Esposito (the Comics Editor for IGN) with art from Jonathan Moore (FUBAR). An inventive twist on the noir genre, FOOTPRINTS stars Mr Foot, aka Bigfoot, as a world-weary detective trying to find out who killed his brother, Yeti, in a cryptozoological mystery that spans decades. FOOTPRINTS #3 & #4 comprise the penultimate and final instalments of the comic book series that AMO recently pronounced Best Comic/Graphic Novel of 2011. 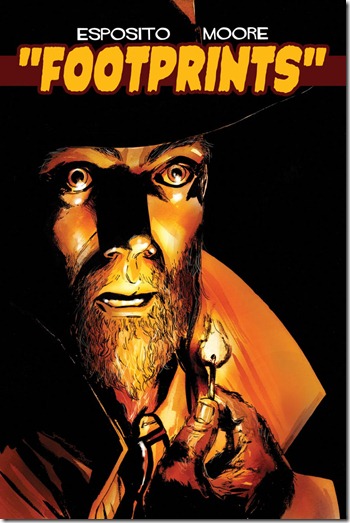 FOOTPRINTS #3 further explores the murky depths of Mr Foot’s past, whilst also revealing some shocking revelations during the present. Mr Foot has always been a troubled noir hero in the classic sense. Refreshingly, it turns out that his emotional flaws weren’t simply inserted to facilitate narrative darkness or moody voiceover delivery.

The underlying sense of awkwardness that pervaded between Mr Foot and his crew – the Jersey Devil, the Loch Ness Monster and Megalodon, a giant shark –  in previous issues is fully explored here. It turns out that Motheresa (the beautiful woman with huge, moth-like wings first glimpsed in FOOTPRINTS #2) did more than just separate Mr Foot and his brother – she dismantled the entire gang. 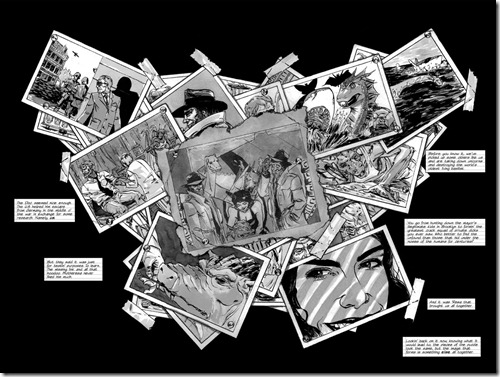 FOOTPRINTS #3 is just as brilliant as everything that came before it, suffering only slightly due to its position as the penultimate issue of the mini-series. Taken out of context, it is admittedly more build-up than payoff. However, that shouldn’t deter fans of the series – the artwork is still beautifully inky, the writing still sharp as a knife… and the explosive payoff is en route. 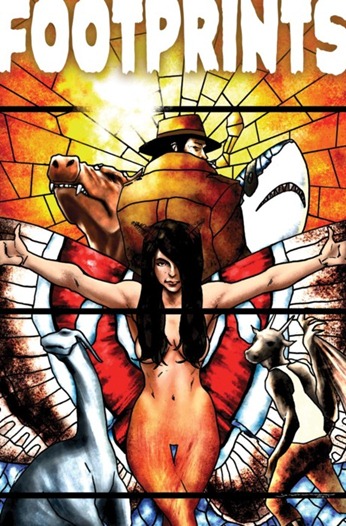 FOOTPRINTS #4 wraps up one of the most inventive and original comic book mini-series of recent years. Whereas the penultimate issue was all build-up, this final instalment is pure payoff. Mr Foot kicks all kinds of ass as he fights both friends and foes in a battle that will decide the fate of the earth as we know it. Motheresa makes for a highly memorable femme fatale in the Jessica Rabbit mould – is she really bad, or just drawn that way? Turns out the Fountain o’ Youth don’t do shit when your head is detached from your neck. 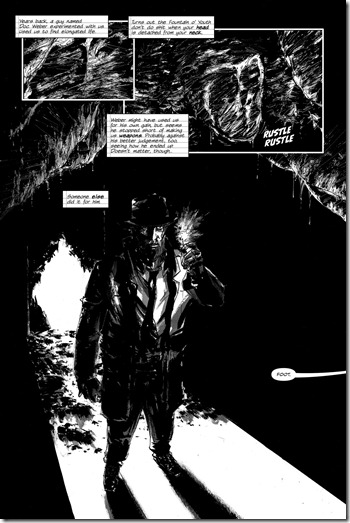 It pains Mr Foot so much to even be near her that it actually remains a gamble whether he can make the right decision when the time comes – this uncertainty makes the grand finale all the more exciting and unpredictable. There are some gorgeous panels in FOOTPRINTS #4 (including a glorious double page spread showing a wave of moth-soldiers descending upon Mr Foot) that showcase just how fantastic Jonathan Moore’s black-and-white artwork really is. 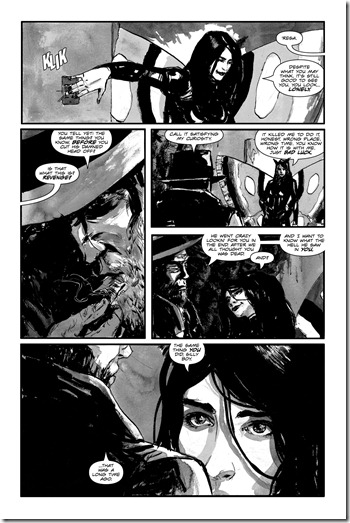 Matched with Joey Esposito’s sharp writing – especially the dialogue – and obvious love for the medium, the end result is a comic book series that takes itself seriously despite the outlandish premise – and quite rightly so. It may not be the deepest of comic book reading experiences, but it has heart and soul and that counts for a lot. I truly hope this isn’t the last we see of Mr Foot and his friends – it would be a crime worthy of the Foot Bros Detective and Recovery Agency. Highly recommended reading for all humans and mythological creatures, FOOTPRINTS is an independent comic well worth your time and money.