Turf is a five-issue comic book mini-series written by Jonathan Ross and illustrated by Tommy Lee Edwards. A hard-boiled crime thriller with a twist, it showcases gangsters, vampires and aliens fighting for dominance in 1929 New York at the height of prohibition. This new UK hardback edition from Titan Books collects Turf #1-5 and also includes exclusive concept art and guest cover art by comic book legends such as Jim Steranko and Dave Gibbons.

The story of Turf is unusual… in a good way. Prohibition-era New York has been done to death in the past, but Jonathan Ross skilfully weaves a tale here that, although admittedly far-fetched, is so stylish and well-executed that most readers will simply accept the craziness and go along for the ride. And what a ride it is

Tough guy Eddie Falco is the series’ main protagonist and he cuts a striking antihero. He’s a bad guy with a heart of gold and is so well written and drawn that it’s hard not to like him immediately despite his initially cold exterior. He rolls with the punches, taking vampire and alien encounters alike firmly in his stride. For a story as outlandish as this there needs to be an anchor to weigh everything down and underpin the narrative. Eddie Falco is that anchor.

The story itself is inventive and well told, although the separate parts occasionally feel slightly generic. A stranded space-alien known as Squeed, the Dragonmir vampire family… these individual plot strands can seem predictable at times. Yet mashing them together creates something wonderfully fresh and most decidedly unpredictable. The Dragonmir vampire family is planning to take over New York – then the world – and Eddie must team up with the alien known as Squeed to save the day. Meanwhile, a headstrong young reporter called Susie is trying to catch the scoop of a lifetime and ends up getting much more than she bargained for…

Each issue flows beautifully into the next and it is to Jonathan Ross’ credit that the many different plates being spun all do so smoothly. That isn’t to say that this debut effort is perfectly paced. In particular, Eddie’s initial introduction to Squeed feels rushed almost to the point of being brushed over. They make a great buddy act – Squeed’s bulking figure, hidden beneath a fedora and detective jacket, looks simply wonderful – but it still seems unlikely that a man like Eddie would so quickly befriend an alien life form. Still, when they fight alongside each other, the action is some of the finest seen within the comic book medium in recent years.

This is due in no small part to the phenomenal art work of Tommy Lee Edwards. Edwards has previously worked on such iconic titles as X-Men, Daredevil and Batman. He has also done concept illustrations for films such as Batman Begins and Superman Returns. He contribution to Turf is immense, taking the wildly contrasting elements contained within Ross’ core idea and making them gel both stylistically and tonally. 1929 New York comes to grim life, bloody violence leaps off the page and you will believe that vampires and aliens walk among us…

To conclude, Turf is one of the best graphic novels I have read this year. It would be easy to write Jonathan Ross off from the outset – he is mostly known over here in the UK as a TV presenter and talk show host. However, he is also a self-admitted nerd and comic book geek and his passion oozes from each and every page. This isn’t a skimpy series that focuses on imagery alone – although there is certainly plenty of that to admire. For every eye-catching panel there is also a line of dialogue or a descriptive passage that further brings the story to life. Turf has its faults, but they are few and far between. As far as debuts go, this is one of the very best. Ross and Edwards make a great team and I hope to see them create more comics together in the future. 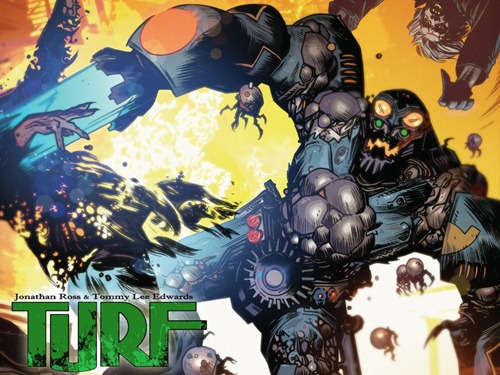 Turf is due for release on the 9th September 2011 and is available at all good book shops.