Harry Potter and the Deathly Hallows – Part 2 is the eighth and final instalment of the Harry Potter film series. The second of two films based on the novel of the same name by J. K. Rowling, the film details the epic final battle between Harry Potter (Daniel Radcliffe) and Lord Voldemort (Ralph Fiennes).

The penultimate Harry Potter film (also directed by David Yates) felt somewhat unusual when compared to the previous films in the series. By splitting the final book into two halves, the story in the final two films was then split between build-up (Part 1) and payoff (Part 2). Perhaps the last film, released in 2010, didn’t quite enchant like it should have done because the build-up consisted mostly of Harry, Ron and Hermione on the run. In 2011, Harry, Ron and Hermione stop running. They return to Hogwarts. They fight. The payoff is nothing short of spectacular.

But I am getting ahead of myself. As the film begins, we have only a brief moment to mourn Dobby’s passing and burial before the hunt for the Horcruxes continues with renewed vigour. Our trio of heroes are soon breaking into Bellatrix Lestrange’s vault at Gringotts bank with the help of the untrustworthy goblin Griphook (Warwick Davis). The break-in is almost unbearably tense, yet it is the eventual break-out, with the aid of a disgruntled dragon, that truly thrills. The CGI is the best it has ever been, David Yates directing without the need for gimmicky camera angles, his focus always firmly upon the actors themselves.

In a finale packed full of noteworthy performances, Alan Rickman as Severus Snape is quite simply awe-inspiring. Throughout the series he has been an antagonist secondary only to Voldemort himself, seemingly intent on making Harry’s life miserable at every turn. To convey Snape’s deeply hidden kindness after all these years without seeming false would be a tall order for any actor, yet Rickman pulls it off with aplomb. His final scenes will no doubt evoke tears from many a fan.

Once the inevitable attack on Hogwarts by Voldemort and his army begins, the film never stops for breath. There are so many memorable scenes crammed in; Professor McGonagall (Maggie Smith) kicking Snape’s arse, Ron Weasley (Rupert Grint) and Hermione Granger (Emma Watson) kissing after destroying a Horcruxe, Neville Longbottom becoming a fearless hero. Fans of the books will no doubt find this fast pace an irritant. Many deaths are brushed over and Molly Weasley’s battle to the death with Bellatrix Lestrange, although still cheer-worthy, is severely cut down from the book. 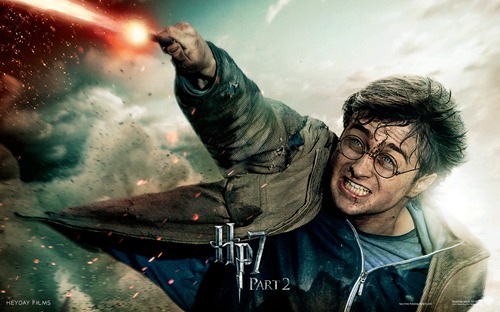 Furthermore, Harry’s battle with Voldemort is needlessly altered from the source material, ending with a secluded battle that therefore omits the much more public nature of Harry’s victory in the book. I genuinely missed the expected whoops and cheers from Harry’s fellow pupils. Thankfully, this odd change is saved by Ralph Fiennes’ undoubtedly career-defining performance as Voldemort. Although not the first time he has portrayed the character, his performance here is terrifying and note-perfect. He is unstoppable, a force to be reckoned with and one of the most memorable villains to ever grace the big screen. Daniel Radcliffe also equally impresses, less a boy and more a man as Harry rushes to face his destiny. Watching these two accomplished actors clash is pure magic, the special effects merely an added bonus.

I grew up with the Harry Potter books and as a result, hold them very close to my heart. They’re not only a part of my childhood, but a significant part of my life growing up. The film adaptations will never be able to match their literary counterparts, but I certainly admire them for trying. It is such a shame that Dumbledore’s backstory was largely left out of this final film, as it really would have added further impact to the ending. However, judged on its own merits, Deathly Hallows – Part 2 may be the Harry Potter film series’ greatest accomplishment. A memorable, magical finale.

Special thanks to our friends at Plaza Cinema for providing AMO with a complementary ticket for Harry Potter and the Deathly Hallows – Part 2.