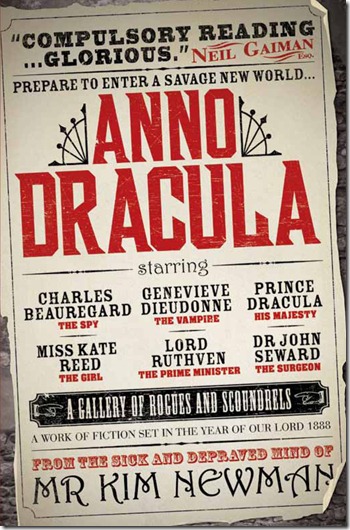 Anno Dracula is an alternate history novel by British writer Kim Newman. Set in London during 1888, Queen Victoria has remarried, taking Vlad Tapes – better known as Count Dracula – as her new consort. England is fast becoming a police state, with vampires advancing both socially and politically whilst humans – “the warm” – face the grim decision of whether to “turn”, or brave an existence as a human being living outnumbered amongst the un-dead. First printed in 1992, Titan Books have recently reprinted Anno Dracula in a brand new paperback edition that offers a wealth of extra material.

Anno Dracula is a potent mixture of genres and styles, a melting pot of historical locations and personalities. It is filled to the brim with characters immediately recognisable from popular fiction – Van Helsing, Dr. Jekyll, Jack Seward – alongside characters plucked directly from the delightfully twisted mind of Kim Newman. Indeed, the book’s two main protagonists present a literary force to be reckoned with.

Geneviève Dieudonné – a vampire elder, four and a half centuries old yet forever trapped inside the body of a 16-year-old-girl – is both beauty and the beast. A volunteer at Toynbee Hall, a makeshift clinic for sick vampires, she is introduced to Inspector Abberline of Scotland Yard to aid in the ongoing investigation of a series of murders committed by an unknown perpetrator known only as “Silver Knife”, who later becomes known as “Jack the Ripper”. Geneviève is certainly a vampire with more bite than most…

She kissed the air and squeezed, hearing his bones grind together, allowing the sharp points of her thumbs to cut into the thin veins of his wrists. Panic grew in his watery eyes.

Softly, so he alone could hear, she spoke in his own tongue, informing him that she was of the opinion that his ancestors knew only the love of mountain goats and asserted strongly the probability that his organ of generation was as flaccid as a newly-lanced plague bubo.

Charles Beauregard is an agent of the Diogenes Club, an arm of the British Secret Service that represents the crown in matters that cannot be made public. He is instructed by his superiors to aid the police investigation and hunt down the killer that has been butchering – with surgical precision – vampire prostitutes in the Whitechapel area. Charles is a man who has long resisted the “Dark Kiss”, forging his own path in a world he can no longer truly call his own. Before long, his investigation crosses with Geneviève’s and their destinies entwine irrevocably.

There was a blur of movement behind the creature, and he paused, delicately cocking a pointed ear. Charles was closing on him, sword a silver flash. If he could get the point into the elder’s body and transfix him through the heart…

The vampire’s arm bent backwards in three places and his hand fastened on Charles’s wrist, halting the sword-lunge. As he twisted his grip, the sword revolved like the hand of a clock, never quite scraping the Chinese’s garments. It fell with a clatter on the cobbles. The vampire flipped Charles over, tossing him away with his weapon. The crowd groaned in sympathy.

Anno Dracula is beautifully written, unravelling at breakneck speed with confidence and determination. Kim Newman bravely chooses not to rest his tale solely upon the mystery of the Whitechapel murderer, instead revealing their identity very early on. This a complex thriller that mixes politics with drama, social commentary with horror, vampires with romance (that last combo occurring long before Twilight hit the scene).

As well as being a guaranteed page-turner, Anno Dracula also offers a vividly created alternative reality that soon becomes a joy to explore. Somewhat similar to Terry Pratchett’s Discworld, Kim Newman’s vampire-infested London feels like a fantasy universe that is alien yet strangely similar to our own. Although quite humorous at times, it is due to the obvious respect for the words being written and a reverence for the story being told that Anno Dracula never feels silly, even if corner pubs have swapped real ale for pig’s blood.

‘Good night Geneviève’, he said, turning away. He walked into the fog and left her, his blood still on her lips.

She knew as little about Charles Beauregard as she had about Druitt. He had never really told her why he was interested in the Ripper. Or why he continued to serve his vampire queen. For a moment, she was frightened. Everyone around her wore a mask and behind that mask might be…

I quite simply cannot recommend Anno Dracula enough; I have mentioned only a mere fraction of the numerous plotlines and personalities featured throughout the book within this review. Kim Newman is a master storyteller, steadily layering multiple details and characters on top of the core narrative without ever losing focus or confusing the reader. A breathless account of a 19th century England ruled by Count Dracula, Newman may have taken inspiration from a number of sources, but ultimately makes this unique story entirely his own. Gory, gripping and packed with social commentary, Anno Dracula is a masterpiece.