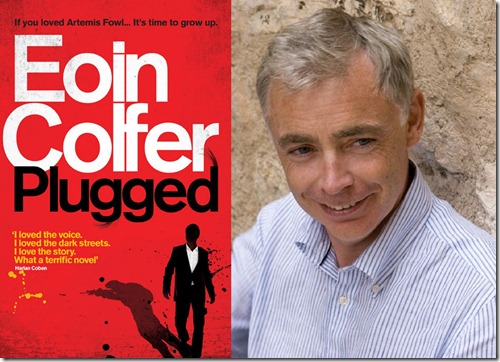 AMO recently reviewed Eoin Colfer’s latest novel Plugged, describing it as a “phenomenal page-turner of a book that offers one of 2011’s best reads so far.” Much to our delight, Mr Colfer then kindly agreed to join us for an exclusive online interview where we discussed Plugged, his Artemis Fowl series of books and baldness!

Hello Mr Colfer, thank you for your time and welcome to AMO!

Thanks – I have always felt a little alternative.

I am an ex-primary school teacher, Irish man in the first bloom of mid-middle age with the sense of humour of an adolescent. I spend most of my day writing and the rest being harassed by my two sons.

You are most well known for the Artemis Fowl series of books. Where did the inspiration for the original book come from?

Artemis is simply an updated version of the oldest Irish story there is, i.e. a naughty boy capturing a leprechaun for its crock of gold.

What can you tell us about the upcoming eighth book?

The eighth book is the final one in the series, and in this adventure Artemis has to defeat the spirits of a platoon of Berserker warriors that have inhabited the bodies of his friends and family. So he has to get the fairy warriors out of his family’s body without hurting anyone. A difficult task even for a boy genius.

Is it true that this is going to be the last book of the series?

Yes. It will come to an end in 2012 – after fifteen years of working on the series it will be strange to say goodbye.

In 2008 you were commissioned to write the sixth instalment of the Hitchhiker’s Guide to the Galaxy series. How did you approach this?

I approached this with terror and respect. I wanted to write a book that would be seen as an homage to Douglas without being slavish to his style, as his style is unique. I lost weight worrying about that one.

Your latest book, Plugged, has recently been released. What is the book about?

It is a comedy noir thriller- a nomediller. I think it’s a new sub-genre.

Unlike the Artemis Fowl series of books, Plugged is a decidedly adult novel. What prompted this change of direction?

I like to change direction between Artemises – it keeps the series fresh and interesting for me and the readers. I think if I did 20 Artemis books in a row everyone would be yawning by page ten.

The protagonist, Daniel McEvoy, is an Irishman much like yourself. Is he based on anyone in particular?

Dan kind of has my thought patterns in the body of a much more capable physical person. I am five six and Dan is six five. Maybe I wish I was like Dan.

How would you describe him as a character?

I think Dan is basically a survivor. He has been through a lot and survived by doing what he has to do, but at the end of the day he has a good heart and cannot bear to see the innocent hurt too badly.

How much of a challenge is it to write a novel set in New Jersey when you live in Ireland?

It was a challenge to get the tone right, but because the narrator is Irish I had a little leeway. My US editor asked me how long I had been living in NJ when he read the manuscript which is a good sign.

How much research was involved?

I did a lot of internet searches and watched the Sopranos a couple of times but that was it. Very enjoyable research. I think we are all more savvy now when it comes to location because of the internet and TV, so the important thing was to find the right voice and use geographical details sparingly. People who are from a place don’t tend to talk about it as much as people who are pretending to be from a place.

Was this novel inspired by any other books or films?

I think it was inspired by all my favourite crime writers and shows; from Ken Bruen and Mark Billingham to Sherlock Holmes and Raymond Chandler.

The book deals with some pretty dark subject matters, but counterbalances this with some equally dark humour. How difficult was it to get this balance right?

This is a tough one and I often tipped over the the edge with the humour which means sacrificing the story, luckily my editors pulled me back on course.

I recently reviewed Plugged, describing it as “a phenomenal page-turner of a book that offers one of 2011’s best reads so far.” Did you ever worry that such a drastic change of direction would not be well received by your fans and critics?

Thanks for the kind words. I really appreciate them as I was really worried that Plugged would not go down well, especially as I am trying to make the jump from YA to adult. I would love to say that I am not affected by people’s opinions of my stuff but I am as insecure as the next writer.

Where did the idea of including a subplot involving hair plugs come from?

My notes are full of crazy plot lines and I wanted to give Dan an Achilles’ heel that would make him seem a little vulnerable but also more human. I found out about this operation from a talk show here in Ireland that ran an item a few years ago.

Why do you think men dislike the idea of becoming bald so much?

I think it is a combination of factors. Firstly it is a sign of aging which men dislike as much as women, also society tends to make fun of bald men. I am lucky in that I have held on to most of my hair but I still check it closely every month or so.

Is the adult crime genre one you would like to revisit again in the future?

I would love to alternate between YA fiction and crime. There are many other genres that i would like to visit also. Maybe even romance some day.

Will Daniel McEvoy ever return in a sequel?

I think it is pretty definite that Dan will come back. I already have a story in mind.

What is next for you Mr Colfer?

I am working on the final Artemis Fowl book which is called The Last Guardian and will be out this time next year.

Thank you for your time! Plugged is one of the best novels I have read this year and I look forward to seeing what you write next!

My pleasure. Thanks for the kind words.