Many of you will remember Typing of the Dead, a cult Dreamcast game that had you shooting zombies not with a large plastic peripheral, but with good grammar. Each correct word typed downed a zombie in a shower of blood and perfect English. Texting of the Bread is the debut game from Screwattack.com, and doesn’t so much borrow the same formula as basically shrink it down to fit on your iPhone.

The premise is so simple, the game’s title effectively acts as its instruction manual. As gingerbread men move across the screen towards the chain gun-wielding, cow-wearing heroine, various words appear above the enemies. With each correct letter typed using the on screen keyboard, a bullet is fired. Successful spelling of the word defeats the gingerbread man.

Initial trepidations about killing zombie gingerbread men with good grammar dissipate quickly. A well balanced difficulty curve coupled with a performance grading system at the end of every wave soon makes it difficult to put the game down. Enemies can fill up the screen quickly, and careful selection of your next target can mean victory or a face full of a delicious, whilst all the while vicious, snack. 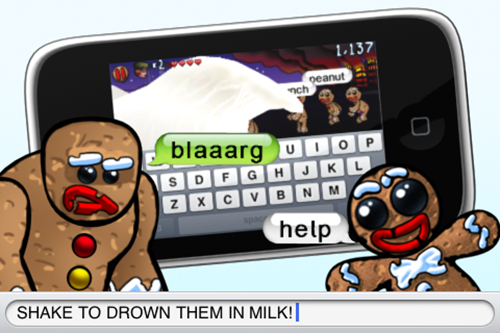 As you progress through the main adventure mode’s 75 waves, things become very frantic, and unless you possess the texting ability of a 13 year old schoolgirl you’re going to need some help. In the background stand two large towers, connected to the udders of the cow nonchalantly strapped to your back. With each successful letter typed, the towers fill up with milk, and should things become a bit too much a quick shake of the iPod will send a wave of milk over the screen, killing any remaining gingerbread foes.

Thankfully, the range of words doesn’t consist of merely ‘text speak’ (although ‘lol’ seems to take up a large presence during the opening waves). The occasional message about eating your brains is spelled out to you, and I have to admit I did chuckle a bit when ‘sarsaparilla’ sprang up during a bout of acronyms with ‘wtf’ and ‘bbq’ interspersed. 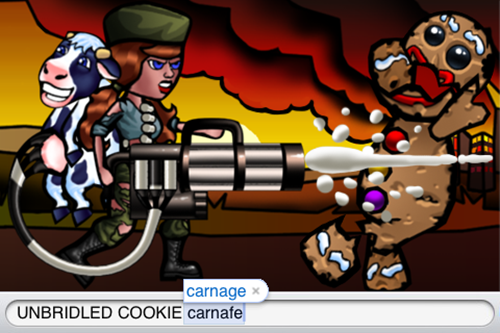 A survival mode, achievements and Facebook integration top off the package with a performance grade at the end of each wave. Both the visuals and sound are fairly lo-fi, with character models looking rough around the edges, and the numerous groans from the enemies sounding grainy.

It’s not quite the revelation fans of ScrewAttack would have you believe, particularly if you visit the Facebook page. While it certainly is addictive and cheap, there are far better games available to make use of your fingers. Maybe it’s just because I hate texting…