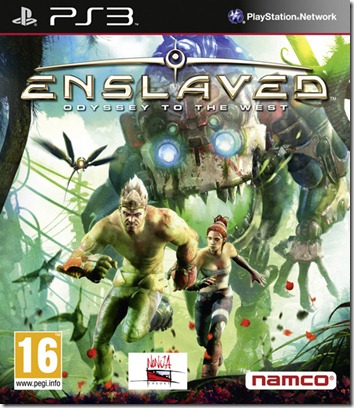 Enslaved: Odyssey To The West is an action-adventure game for PlayStation 3 and Xbox 360. Developed by Ninja Theory (Heavenly Sword) and published by Namco Bandai Games, the storyline is based loosely upon the Chinese novel Journey To The West. The game’s collaborators are numerous and impressive, including writer Alex Garland (The Beach, 28 Days Later) who co-wrote the story, and actor Andy Serkis (Lord Of The Rings, King Kong) who directed and provided motion capture. 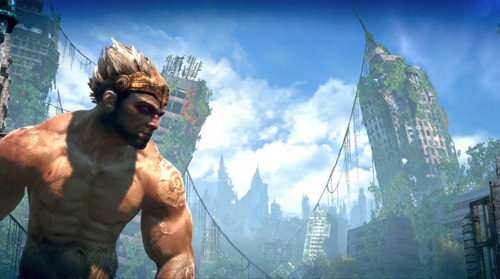 Enslaved tells a simple story in an epic manner; there is little time wasted explaining the intricate details of how the journey begins. Instead, player character Monkey – a tribal-style warrior motion-captured and voice acted by Andy Serkis – wakes up onboard a slave ship that is set to imminently crash. Together with Trip, a woman desperate to get back home, he must escape. Sufficient ‘wow’ factor is provided when, exploring the ship, the floor suddenly rips away, revealing that you are in fact flying high above a post-post-apocalyptic (not a typo) New York City, 150 years in the future.

These opening moments show off many of Enslaved’s key ingredients. The drab bowels of the ship disappearing to reveal the sunny beauty of the outside world promises much of the journey ahead. Monkey can jump and climb with ease, handholds lighting up to aid his progress. Death during such sequences, especially earlier on, proves practically impossible. The platforming almost feels automatic at times and the introduction of crumbling ledges deeper into the quest does little to shake this initial impression. It looks amazing and is easy to master, but lacks any real depth or freedom. Monkey can’t even attempt to make a jump unless he is supposed to, ledges complete with invisible walls.

Combat improves on this by trading some rough edges with increased interactivity. It admittedly doesn’t look as pretty or control as well, but variety is plentiful. There are many mechs (robots) dotted throughout the various environments, unaware that the war is over. When Monkey goes within a certain radius, shown visually as an emanating circle, the enemy mech will spring to life and attack.

Staple light and heavy attacks are mixed with electric blasts and finishing moves, as well as a shield to block the constant barrage of smashing enemy arms. Combat remains varied as a result, although not everything is perfect. Camera angles in particular can cause major headaches during combat sequences and locking on to an enemy is never as easy or as useful as it should be. Thankfully, combat is spaced out enough to make it an enjoyable distraction rather than a obligatory chore, yet it never truly shines as much as the platforming sections despite increased interactivity. 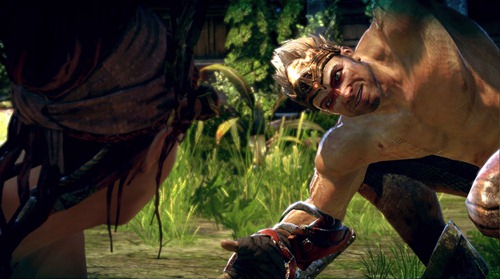 What ties these two fun yet underdeveloped gameplay mechanics together is the storyline and characters. Red-headed Trip wastes no time fitting Monkey with a slave headband once they are off the slave ship, forcing him to help her on her quest back home. The game’s objective of keeping Trip alive (if she dies, Monkey dies) and the on-screen HUD are all explained via this device, offering concrete reasons for game design choices that many other developers would have simply forced upon gamers without explanation.

Of course, this initially frosty relationship grows with time, as is to be expected. Yet the motion capture and voice work of Monkey (Andy Serkis) and Trip (Lindsay Shaw) is exemplary, allowing a genuine relationship to blossom. It is such a simple thing, down to good writing and professional acting, that sadly remains the exception rather than the rule in video games. Strip away these characters and the game would suffer terribly as a result: they undeniably make the game what it is, and then some.

The world itself is beautiful, with heavy use of the colour green to convey a world where nature is slowly starting to take back over. Detail is impressive too, ranging from the odd markings covering Monkey’s body, to towering semi-collapsed skyscrapers and demolished highways. The majority of the game takes place in New York City and this is where it truly shines: later environments lack the same sense of scale and authenticity. Unreal Engine 3 creaks at times too, with texture pop-in fairly common and screen tearing, along with a struggling frame rate, par for the course.

The design of the robots themselves is superb though, somewhat making up for Unreal Engine 3’s shortcomings. Monkey and Trip, along with the mechs, feel entirely real. There is a tangibility to larger enemies that feels wonderfully dangerous: these beasts look and sound exactly as you would expect and to give the developers credit where its due, they manage to achieve some amazing moments as the story progresses. 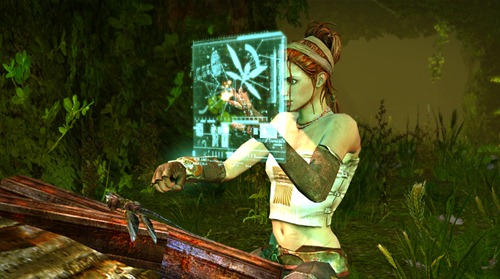 Of course, technical issues such as the aforementioned screen tearing and texture pop-in are annoying but not game breaking: there are many games with similar issues that still reign supreme through superior game design. Sadly, Enslaved isn’t one of them. There are a wealth of further technical issues that continually mar the overall experience. I just wish that the game engine would have allowed Ninja Theory to fully realise their vision.

The biggest problem I experienced was with the sound: at one point during my playthough the majority of the sound effects went missing and never fully returned thereafter, even after rebooting my PS3 and loading an earlier save. Cutscenes often feature out-of-sync sound too and one moment in particular was entirely ruined, for this reviewer at least, due to a combination of both issues. Ninja Theory are currently working on a PS3 patch to allow 5.1 Dolby Digital over optical cables (it currently only works via HMDI) so hopefully that will help sort out these other issues too, but who knows? In short, Enslaved has an overall lack of polish that sullies its other positive attributes.

This is a game with a much more enjoyable first half. The second half moves out of the city and tries to spice things up with such inclusions as the ‘cloud’, a hoverboard type device that can only be used in certain areas, and a reliance on Monkey’s shooting staff. These inclusions only further distance the game from what actually works well and as a direct consequence the gameplay starts to grate despite a short completion time. Trip is also underutilised and her teamwork with Monkey should have been a stronger focus. Collecting ‘Tech Orbs’ to buy new skills feels strangely outdated too.

The story is doomed to a similar fate: the strong opening is not done justice by the plodding final moments and by the time the story reaches its admittedly original, though-provoking ending, it is just a case of too little too late. The seeds were sown here to provide one of the freshest storytelling experiences in modern gaming, but everything ultimately peters out to such a degree that the magic is quickly lost. The characters are Enslaved’s strongest quality; to waste a wonderful supporting character (Pigsy) and not fully realise Trip and Monkey’s relationship is foolish.

To conclude, Enslaved is a true oddity in gaming, especially in 2010. It does so many things right, yet never manages to fully realise its true potential. It starts with plenty of promise but never seems confident enough to hand over full control to the player. It feels as if the second half was rushed too, leading to an increase in bugs, as well as a decrease in story development and characterisation. Without a myriad of technical issues Enslaved would have certainly received a higher score for its characters and setting alone.

There has been plenty done right here, yet slightly underwhelming gameplay becomes increasing transparent as the game progresses, with generic locations and goals doing a disservice to the strong aesthetic design. A final lick of paint would have done wonders for Enslaved. As it stands, gamers are left waiting for a patch to fix bugs that should have been ironed out long before release. Still, I must confess: I enjoyed Enslaved despite its faults. When it works, it rivals the very best in the industry. As a result, it comes cautiously recommended… but only just.

One response to “GAME REVIEW – Enslaved: Odyssey To The West (PlayStation 3)”