The vampire genre has admittedly been done to death as of late, although recent hits such as HBO’s True Blood and the Twilight films have done plenty to reinvigorate its appeal with mainstream audiences. Which might go some way towards explaining why the somewhat obscure 2002 film Demon Under Glass was re-released on DVD last month, this time simply titled Vampire.

Based on the novel by Deborah Warner which was also published in 2002, there is actually nothing inherently wrong with Vampire’s plot. The basic premise is that a vampire has been captured by the government and is being studied to better understand the science behind vampirism.  Dealing with several weighty themes such as captivity, humanity and human instinct, it actually puts forth some very interesting ideas about what makes humans just as dark as any monster of the night. Which is why the poor execution of the film itself is such a letdown.

Shot on digital video, Vampire looks like a very dodgy 1970’s porno film throughout. The colour pallet is all over the place and it doesn’t help that many of the scenes are covered in heavy grain. Low budget films can still look great of course but Vampire looks bad from the outset. When the government first catch blood draining serial killer ‘Vlad’ (I know, I know) at the beginning of the film via a police sting, everything looks tellingly cheap, ruining the immersion. It also doesn’t help that the special efforts are so poor, ranging from a prop door torn from its hinges (which looks ridiculous) to a CGI helicopter, complete with a blurred background to hide the lack of an actual night-time cityscape. 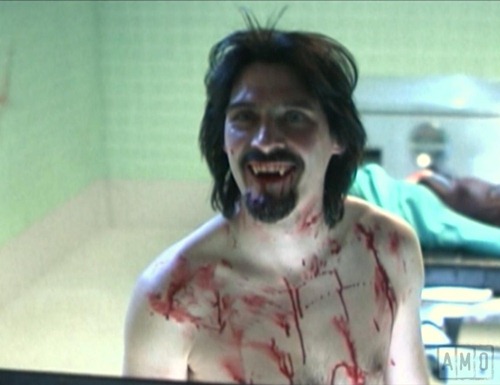 The main part of the film takes place in a top secret government facility, which, apart from merely being on the 6th floor of a hospital (they just leave the 6th floor off the sign so nobody knows!) is actually the most decent section of the whole film. English actor Jason Carter (Babylon 5) as Simon ‘Vlad’ Molinar isn’t half bad, playing a very convincing vampire and at least delivering the hokey dialogue with admirable aplomb and an air of suaveness. Garett Maggart (The Sentinel TV series, also the older half-brother of singer Fiona Apple) as Doctor Joseph McKay reminded me a lot of Mark Ruffalo, conveying a similar sense of effortless likeability. It is only due to the chemistry between these two actors that the entire film doesn’t come crashing down around them. They deserved a better film and script.

So what does Vampire do right? Well first of all, it offers some great contrasts between good and evil for viewers to ponder. Is a vampire inherently evil when it is their strongest instinct to kill and drink human blood for survival? Are the doctors themselves evil for inflicting pain on a vampire just so they can understand its healing properties? I often lamented the low budget when watching: with the right financing this could have been a great little indie film. Then again, low budget (£45!) zombie flick Colin was released in 2008 and managed to get shown at the Cannes Film Festival! So it isn’t as clear-cut as blaming it all on financing alone.

Still, the scope of the film can not be fully realised when actors are delivering their lines like they are half asleep, dressed in costumes that look homemade. Swat teams with cut-out white crosses on their chests, dressed in plain black from head to toe, look like something from a school play. The policewoman in the film’s only subplot is also laughably bad, although to be fair it might not be entirely her fault. Her lines are pretty terrible and her crime solving skills boggle the mind: she eventually finds the top secret facility at the same hospital ‘Vlad’ was initially administered to. Colombo salutes you!

To make matters worse, the ending is terrible and practically undoes any of the more subtle ideas that the central premise manages to offer. Vampire is director Jon Cunningham’s only film as director to date. Without being cruel, this may be for the best. Capturing the action onscreen with all the finesse of a CCTV camera, Channel 4’s Big Brother has better direction and editing than this film. Perhaps worth a watch for its potentially good premise, but tremendously disappointing in its execution, Vampire is much more likely to evoke bursts of laughter than gasps of horror.

One response to “FILM REVIEW – Vampire (a.k.a Demon Under Glass)”