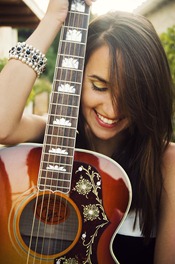 Ana Free  is a singer-songwriter from Portugal, although she currently lives in the United Kingdom.

She originally rose to fame via Youtube several years ago, performing covers of many classic songs: her most popular, Nickelback’s ‘Savin’ Me’, has had over 1,000,000 views to date.

Ana made her first live TV performance in the summer of 2007 on TVI in Portugal, where she sang ‘Crazy’, a song she had composed herself. She is currently recording her debut album following the success of her first single, which was released on 23 May 2008, entitled ‘In My Place’.

Alternative Magazine Online is therefore proud to present a recent chat we had with Ana about her past, present and (of course) future! Enjoy!

Hey Ana, thank you for your time. Could you tell us a bit about yourself please?

Sure! I was born in Portugal to a British mother and Portuguese father, and attended an international school until I was 18. When I finished high school, I moved to the UK to study Economics for 3 years. I love music, it’s my greatest passion and I see it as my calling, but I give education a very large emphasis! I finished my degree in 2008 and moved to London where I’m currently based, recording my debut album and travelling for tour!

You have a very distinctive accent! I also hear you can speak five different languages?

People almost always comment on my accent because it has an American twinge, which is odd to them given where I was born and raised! I grew up around so many different cultures, accents and influences at school, that when all of it was combined, I ended up with this hybrid accent! I do speak quite an array of languages, Portuguese and English being the most fluent of the lot. Apart from those I also speak Spanish, French and Greek!

You studied economics in the UK… is this something that has always interested you? Would you seek a career in this field, or is music always going to be your true passion?

I put a huge emphasis on education. I think it’s important, and I believe everyone has the right to a good one. I realised I was lucky enough to have the opportunity to go to University and thought about alternatives to music, should I ever need any. I picked a subject I felt I really liked and decided to take a degree in it! Economics was the best fit for me, and I loved my course. I’d like to do a Masters eventually, but we’ll see whether I have the time!

Will Portugal always be home? Or did studying/ performing in London start to make you feel like a Brit?

Naturally, Portugal will always be home to me because it was where I was born and where my life took on a lot of important shapes and values. I do feel a wonderful affinity with Britain though, I also feel very comfortable in London. I think speaking the language in the country you’re based in really helps a lot. I learned a lot about the British culture when I moved to the UK, but I’ve always been quite good at adapting.

It wasn’t easy learning to be on my own more than I was ever used to, and independence is earned by working hard and believing in your capacity to positively juggle situations and decisions alone. It all comes down to how you approach your life and your surroundings. I think I’ve found a wonderful balance for myself, and so I feel I could be almost anywhere in the world and be alright! 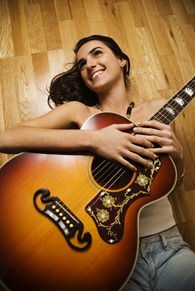 What relationship do you have with your fans?

I share a really healthy relationship with them! In terms of communication, I have as many social platforms in place as possible to allow for communication and banter. I love hearing what they have to say and the crazy ideas they come up with.

There’s a large age range too, so I get a little bit of everything! I keep in touch as much as I can, mainly over Twitter and Facebook because they’re very dynamic! I try and get them as much music and information as possible over the official website (www.anafreemusic.com) – I want them to be as much a part of my music as I am!

You obviously feel comfortable with leaving outtakes after some songs? Do you find it easy to make fun of yourself?

I love making fun of situations that clearly lend themselves to it, as long as it makes other people smile! I used to find it harder to make fun of myself, but I think everyone finds that difficult when they’re growing up and trying to make a mark on the world and the people in their lives.

I live much more comfortably now that I realise what my goals are, and how to go about achieving them! I’m happy with who I am and how far I’ve come, so I think it’s nice to be able to laugh at myself. I leave the outtakes in after some of my songs because I think the fans will have a laugh with me and appreciate the crazier, more quirky side of who I am and what I do!

Do you find it easy to write music, or do you get writer’s block? What inspires you?

I usually find it very easy to write songs! I have over 300 since I was about 11 or 12 years old. Inspiration comes to me in different ways. Sometimes it’s a personal matter that I need to get off my chest and move on from, and other times it’s everyone else’s matters I’m writing about (but they don’t usually know that)! It’s rare that I write from someone else’s point of view but it happens sometimes.

Despite its specific subject matter, “The Rain” for example, is not an autobiographical song; it was written from imagination and from stories.  I often write late in the night (3am or later!), before I sleep and when I’m alone,  because that’s when everything feels quiet and there’s enough space for my thoughts to collect clearly. It can be really unfortunate that sometimes lyrics and melodies come to me just between the states of awake and asleep and I never have any energy to write them down!

I get writer’s block when there’s nothing that speaks to me or when I’m going through something too intense to process at the time. It can last anywhere between a couple of days to half a year! It’s a natural occurrence though, I can’t always let my imagination and thoughts float around, especially with a career that keeps me so entertained and busy!

Youtube got you a lot of attention and a lot of fans. How do you feel about this method for people getting themselves out there and noticed?

The internet can do wonders for sharing work and communicating with others. I find it a very useful tool and I think it’s very complimentary to my line of work. I think in this day and age everyone who intends to share their work or promote anything will turn to the internet as one of the first available and powerful options. The YouTube and social networking phenomenon is really breathtaking, and I’m lucky to be wrapped up in the thick of it. I think at the moment the internet is one of the best and most dynamic ways for people to get their sound out there!

You have several songs available on Amazon and iTunes. When will the full album be released? Will it be all new material?

The debut album is currently being recorded in London and its release date is hopefully within the year 2010. I am anticipating this album as much as the fans because it’s my first project and the fans have high expectations. All the material on it will be original and I always take my time when recording for it because I want it to be as good as I can make it for my fans. I’d like to do a cover album one day, that’d be a fun project! I’m about to release an EP with some of the bigger YouTube hits I’ve had, and I really like the hybrid sound coming together on it at the moment!

Is it important when doing a cover to put your own spin on things? What are your favourite songs to cover?

I think the interpretation of a cover is very subjective. Personally, I only cover songs that I like to sing and listen to because I think that’s the only way I’ll be able to convey them well. I care about what my fans request, and have a list of songs they’ve asked me for! The fans are a great source of imagination for me and that’s why I prioritize their opinions so highly. I don’t intentionally change cover songs, I just adapt them as they flow to the sound of my guitar and voice! I love covering all kinds of genres, from acoustic to pop and hip-hop. I’m also a big fan of medleys, I think they always have a wonderful element of surprise.

Thank you for your time Ana!

Special thanks to Ana Free and her manager Blake Brandes. All photos used for this article are copyrighted by photographer Joe Martinez. Youtube videos used with permission.

You can find out more about Ana Free (and listen to some more of her performances) on her official site!

5 responses to “INTERVIEW – In Conversation With Ana Free (Musician)”