INTERVIEW – In Conversation With Mike French (Author, An Android Awakes)

Alternative Magazine Online recently reviewed An Android Awakes (a bold cross between a science fiction novel/graphic novel/short story collection), describing it as “filled to the brim with humour, violence, thought-provoking content and great imagination.” AMO is therefore delighted to present an exclusive online interview with the author of the book and the man behind Android Writer PD121928, Mike French!

Hi Mike, thank you for your time and welcome to Alternative Magazine Online!

Hi Martin – thanks for inviting me.

I’m highly dangerous and should only be approached with caution. Martin? You still there?

You were previously the owner and editor of the prestigious literary magazine The View From Here. How did you make the jump to published author?

I was always doing both, but the magazine took off first and was great fun – we published a lot of material from new writers and interviewed some great people like Dave McKean and the late Ian Banks. But when my first novel was accepted by a publisher and my own writing career started to take off I couldn’t manage both. We ran for seven years though – so pretty good.

I recently reviewed your latest book An Android Awakes, which I described as ‘a science fiction novel filled to the brim with humour, violence, thought-provoking content and great imagination.’ What’s the premise of the book?

That in the future humanity has ceased to produce anything creatively and everything from films to books is produced by autonomous machines. Artificial Intelligence features a lot in films and television drama series at the moment but the role of AI in affecting our society through culture hasn’t been explored. Although some news articles are now picking up on stories of robots playing music and painting.

Where did the idea for An Android Awakes come from?

It came out of an interest in artificial intelligence and George Orwell’s line in his novel 1984 about novel-writing machines. I also wanted to write a modern version of Arabian Nights in which Scheherazade tells stories to captivate King Shahryar in order to save her life.

Do you think of An Android Awakes more as a novel or a graphic novel?

I think it doesn’t sit comfortably in either of those categories – it’s really a hybrid of those two formats. Conceptually I think of it as a project that uses prose, art and design to convey a story. What people label that project as isn’t really important to me. 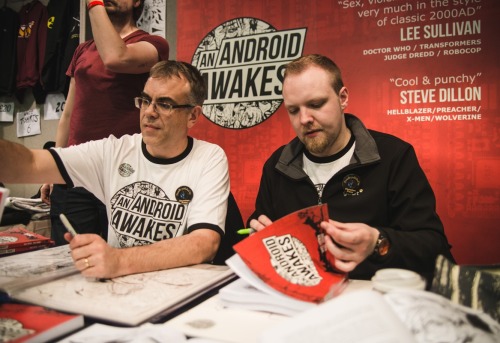 Karl Brown’s illustrations are wonderful. How did he become involved with the project?

I first saw Karl’s work at a creative co-working space called A Thin Place in Luton. Karl had recently finished a degree in illustration at the University of Bedfordshire and I was really impressed with his portfolio. That with our common love of comics and in particular the work of Steve Dillon, Moebius & Frank Miller meant we felt that we would be a good match for the project.

How did the collaborative process work?

We worked very closely together and met up at least once a week. Most of the writing had been done before Karl came on board and I would go through each story whilst Karl did very rough design sketches as he listened. For about six months that’s all we did and Karl produced a mountain of work! It was particularly challenging as there are so many different characters in An Android Awakes and Karl had to come up with a distinctive look for each.

After that Karl began work on the final artwork which took about a year to complete. It really was a herculean task as he was also holding down a full-time job – so many a late night working into the small hours of the morning!

The premise of the book allows the inclusion of many short stories. Were these written separately and then slotted into the main narrative, or did they originate organically as you wrote?

They were written separately and slotted in. It was a real challenge writing them as each time I had to come up with a new concept and the story within that concept. A lot of authors decide to pull all their short stories over the years into a collection or to finally get ideas onto paper that have been swilling around in their heads for years. I didn’t really have that, so it was an exhausting but exhilarating process.

Were any short stories left on the cutting room floor?

No – they all made the cut. If I felt one wasn’t quite working I’d carry on editing and rewriting until I found a shape for it that I was happy with.

I loved the Button Man character. What’s your favourite story written by Android PD121928 and why?

Thank you he is one of my favourite characters as well. I think Karl caught him particularly well. But my absolute favourite is The Amazing Arctic Sinking Man. The fact that his answer to the strange situation he finds himself in is to join a circus – well, it gives him a strange childlike charm. And again Karl did an amazing job bringing him to life.

Does the frustration with publishers experienced by Android PD121928 reflect any of your own experience as a writer?

Yes – any writer, unless they are extremely lucky or already famous, will have to deal with the pain of constant rejection. It took me seven years to find my first publisher and that was pretty quick really in the publishing world – it can take decades or never happen at all.

If you’ve watched the episode with Doctor Who called Heaven Sent you would have seen the Doctor take billions of years to chip away at a massive block of azbantium to escape his prison. It’s kind of like that trying to get a publishing contract – but with just the one beating heart. 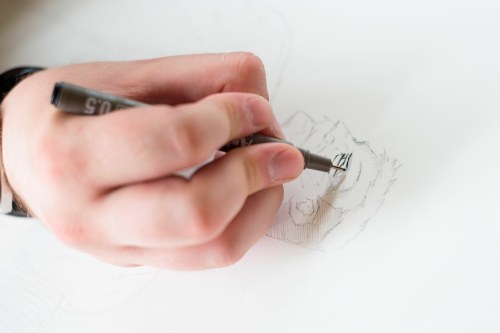 Why do you think science fiction remains so popular?

Because it allows us to see ourselves for who we really are and for what we might become, both on an individual level and as a society. It also taps into the childlike wonder that resides in us all, whatever our age.

I think most people are also uneasy with the notion of death – the fact that they will not live forever – so science fiction provides a way of time jumping someone into a future they will never live to see. In that way you can provide people with a bigger perspective than the one they have from living at the point in time they find themselves. Which I think is healthy for us – a bit like standing on a cliff and watching the sea – the vastness has a calming effect, even though you know the sea is wild and dangerous.

Who or what were your main inspirations when undertaking this project?

George Orwell’s 1984 but also 2000 AD and Blade Runner. In fact it wasn’t until after I finished the project and watched the documentary Future Shock! The Story of 2000 AD that I fully realised how much I had been influenced in my formative years by 2000 AD. My writing shares the same mix of satire, violence and surreal innovation. 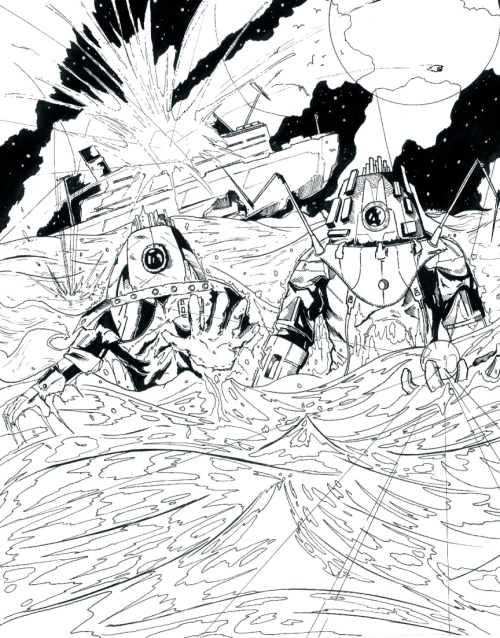 What’s next for you Mike?

I am writing a full length screenplay based on the life of a friend of mine who used to be homeless. It’s a new direction for me – I’ve done two short screenplays before but it’s the first time I’ve attempted a full length script for a film.

Thank you for your time and I’ll look forward to your next project!